The Crawdads – On a platter

The Crawdads formed around 1984 with Paul Murphy on guitar and Dean Kennedy on vocals. They were associated with the Northwood label and had songs on the James Dean Of the Dole Queue sampler. A decade or so later they resurfaced with “On A Platter” their firt long play, under the guidance of Chris Cummings of the Riverside Trio fame (also on Northwood). It’s a perfect balance between rural hillbilly bop/rockabilly with, among others, influences from Carl Perkins recorded in a trio format and tunes with a harder sound that see the trio augmented with a drummer. Cummings also lays steel on one tune. Superb playing and production and good choice of covers. Too bad it’s only been released on vinyl.. 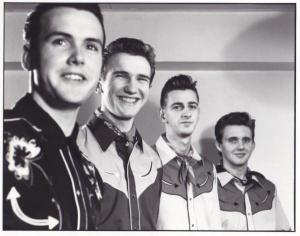