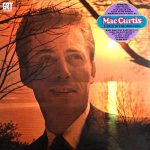 In 1970 Mac Curtis recorded Early in the Morning, an album on which he revisited songs from the fifties with a Country edge. The songs came from the catalogues of Buddy Holly, Chuck Berry, Jerry Reed, Ray Charles, Lloyd Price, etc., with a couple of originals thrown in for good measure.
The repertoire ranged from the bluesy, albeit with steel guitar, Baby What You Want Me to Do, to the Country shuffle of When The Hurts Moves In, which would be perfect for Dale Watson, with a bit of Swamp Rock in between with Gulfstream Line. The majority of the remaining songs are on a thin line between country and Rock’n’roll, and the result is close to what Carl Perkins recorded during the same period.
The musicianship is excellent throughout, but that’s not a surprise with musicians like Tommy Allsup and Leon Rhodes on guitars, Charlie McCoy on harmonica, DJ Fontana on drums, and Curtis’s deep and rich voice beautifully serves the whole album.
The following year, Mac Curtis returned to the studio to record Mac Curtis’ Nashville Marimba band in one day. This is a surprising album, to say the least. Still, with a crew of first-rate musicians, Curtis revisits a set of Country classics in instrumental versions done in an exotica/easy-listening mood. However, it features some sparkling moments on guitar and hot fiddle parts from Johnny Gimble. It’s the kind of album you’re happy to own and play to your friends to see their reaction. You really have to hear their version of Gentle On My Mind to believe it.
Two excellent Country numbers with a Rockabilly feel, recorded in 1974, rounds up the set.
All in all, you have one excellent album, a curiosity and two hot bonus tracks. That’s more than enough to make you jump on this reissue.