Hailing from Germany, this trio played a mixture of wild rockabilly and what is now called old school psychobilly. They started in the 80’s, had an album on Tombstone Record in 1989 (Outlaw) and supported acts like The Guana Batz, Stray Cats, The Keytones and The Frantic Flintstones. On hiatus for a few years the band returned with this mini lp. The slap bass led mid-tempo “Trail To Hell” has a fine cowboy ballad feel. The singer’s voice on this one reminds a bit of the dutch bands The Tigermen and their song “Gone, Gone, Gone” for those who remember them. “That’s Right” is maybe more classical, a fast rocker with a psycho edge but nonetheless very pleasant. Under Vultures is a new version of a song from their Outlaw lp, and has that fine 80’s neo-rockabilly in the chorus I like so much with backing vocals and stop-starts with slap bass solos. This too short ep ends with “Loneley Nights” a slow tempo with a bluesy feel. The overall production work is very well done and the songs are all written by the band.

First long play by this German band released in 1990. The line up on this record is Jürgen Fröhlich on Guitar, Vocals, Peter Urban on Double Bass and Jochen Vaupel (who previously played in the Swamp Dogs) on drums.
This is a classic neo-rockabilly album with twelve self-penned songs and one interesting cover of Creedence Clearwater Revival’s Dont Look Now.

Count Orlock
Pirates And Thieves – Captain Caveman – Magic Bus – Searching -. Hangover – Nutcrackers – Island Of Rock -. Somebody Tell Me – Losing Touch – Gamblin’ Fever – Dr. No – Ready, Willing And Able
Scam released their debut album on Count Orlock in 1988, this first album is very representative of the sound of the day. Light drums, slap bass and a clean electric guitar, influenced by Restless and fellow Dutchmen Batmobile. The sound is good (Johnny Z. produces. Any link to Johnny Zuidhof from Batmobile?) but could be a bit “fuller”. They have good original songs (Hangover, Captain Caveman, Ready Willing & Able) but the long distance (12 songs) tends to disadvantage the band and the album sounds a bit repetitive, they could have reduced it to eight solid songs. They also cover the Who’s Magic Bus,a band previously covered on the Juvenile Delinquents album (My Generation). I’m not sure sure it’s been reissued on cd, so try to grab a vinyl copy on ebay.

Tombstone
Haunted House – Death Train – Can I Get A Witness – Cry Out – I Can’t See – The Eyes – Boogie Disease
Despite an ugly cover, this mini lp, recorded in 1989, shows an improvement from the first album. If there’s not a big departure in term of sound but the band is tighter and the songs less repetitive.

Rockhouse
The getaway – Dead and gone – Cold as ice – Where did I go wrong – Stop bugging me – I’m going crazy – Hang ’em high – Stop that gorilla – You can’t trick me – Goodbye so long – Which way now – Devil’s music – It ain’t right – Bloodbrothers – Trouble tonight – Loved that woman – Drink that bottle down – Candy man
Released in 1991, this album (their third after Gamblin Fever and Infant Years) marks a new step for the band. To their usual brand of light psychobilly/neo-rockabilly, they add a good dose of rockin’ blues with blues harp, saxophone and slide guitar. The set is varied and the song inspired. A guest singer is present on a couple of songs and brings a bit of diversity. A good album that shows the evolution and the maturity of the band. Reissued on cd with four bonus tracks.

The Rockats, not to be confused with the famous American neo-rockabilly band, were a psychobilly trio from Amsterdam. They formed in November 1987 and in May of the following year they recorded their first album “The first Take Off” for Tombstone Records. It contains some good songs but the global sound is a bit “young”. One year later they released “Keep On Turning”, still on Tombstone, with their new drummer Remko Visser. “The Last Crusade”, their third and last album appeared in 1990 showing a slight change in the sound with more agressive melodies and metal influences.
After the band split, Remko Visser remained active, playing with Asmodeus. 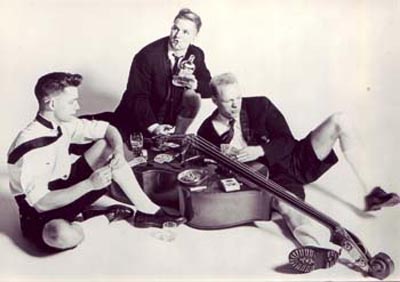 Country: Netherland
The Crazy Tones took form when Remi Groot met Jacco Buchholz in 1985 during a concert of The Keytones. They got along well and decided to form a Rock’n’roll band. Buccholz knew a drummer, “Beerke”, and they started to rehearse on a hot summer day.
They built a small repertoire and played some gigs at Remi’s school, later on in bars and festivals. In July 1986 they recorded in a small studio in Venlo their first demo “Gene’s gone” and “I feel the blues.
A year later, after playing a lot of gigs together with The Keytones, The Chevy Cats, Restless etc. they recorded “Rockabilly Party” and “Let’s make some love” for Disky-records under the supervision of Boz Boorer of The Polecats. It was on a compilation album with 6 other Rockabilly bands from the Netherlands.
The release and presentation was at the Paradiso, Amsterdam.
After Beerke left the band in 1988, Remy had to do his military duty, but kept on rockin’on with The Crazy Tones. Ritchie Adams then joined on drums.
In 1989 they recorded for Tombstone records their first (and unique) album “She’s got what it takes” which is a little neo-rockabilly masterpiece. This album resulted in a lot of gigs around Holland, Germany and Belgium.
They also won the contest “the small-price of Utrecht” in 1990. The price: a track on a CD on the culty Kelt-records company. It was “If you wanna be the 1-4-me”.
The Crazy Tones disbanded in 1992 after a Good-bye-party at The Paradox, Boxtel, the Netherlands.