Twisted Rod – Bring It On 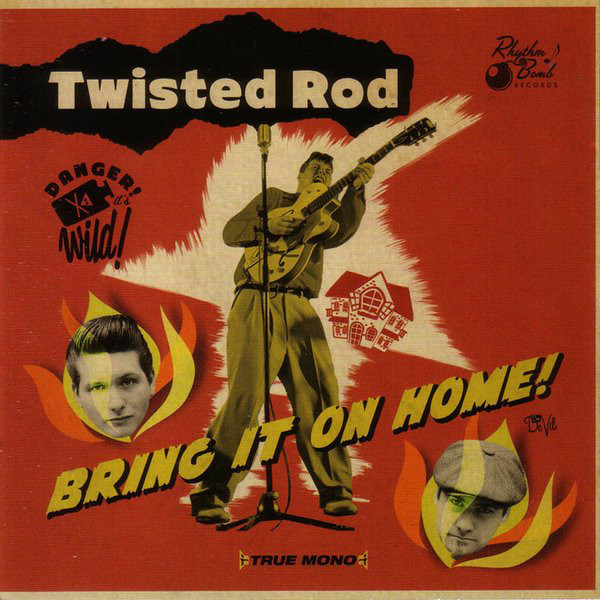 A solid album from this Czech band, loaded with energetic, wild and frantic Rockabilly and Rock’n’roll. If you dig stuff like Gene maltais, Benny Joy and recent bands like the Racketteers and the Raging Teens, go for it, you won’t be disapointed.

Rhythm Bomb – RBR-5883 [2018]
Favorite Doll – Rolling Stone – Secret Lover – Big Boy Rock – Better Way To Move – It Ain’t Right – Shakey Heart – Something Blue – Little E – She’s Gone I’m Fine – Rollerskating Girl – Guy Fawkes Blues
Ray Black & the Flying Carpets is a German quartet. The bandmembers are Ray Black (Singer, Upright Bass), Martin Bone (Lead Guitar), Howlin’ Herbst (Rhythm Guitar, Baritone), and Boz Doz (Drums.)
This album covers a wide range of musical genres. If they don’t convince me with their brand of wild electric Rockabilly, I find them more interesting when they explore other styles. They’ve got a couple of blues bopper and blues-oriented numbers with harmonica and piano that are quite good as well as their more traditional stuff like It Ain’t Right.
I also enjoyed Little E, an early ’60s rocker ala Bertha Lou.
The main problem is that you jump from one style to another, but in the end, the whole album lacks coherence. It’s hard to find the real identity and personality of the band within all those styles. They really should stick to one genre and develop their own style.

Phil Trigwell is an Englishman who lives since 1971 in Sweden. His career really began in 1993 with his group the Deputies and his albums for the german Tessy Records. Then he will often change his musicians and labels signing with Tail Records, Enviken Records, and Armadillo Records. Here is returning to Tessy Records for a new album (not that new cause the tracks were recorded in 2003 but never released before) distributed by Rhythm Bomb Records. Phil shares all the instruments with A.J.Hakwinson. “Boogie Woogie Cowboy” contains 18 titles. It’s a blend of western swing, hillbilly and rockabilly played in a very easy-going style, with a lot of pickin’, and the kind of relaxed way that only the self-assured musicians can afford! This album is well-balanced between Phil’s excellent self-penned songs (seven of them) and covers (sometimes very different than the originals) as for example “Freight Train Boogie” (Scott, Nobar), “Since You Went Away to School” (N Petty), “Sugar Moon” (B Wills), “No good Lover” (Baker, Vanderpool), “Hillbilly Express” (Garland, Collie) “Travelling Light” (sung by Cliff Richard) and “Hooray For That Little Difference” (Autrey Inman)
It’s evident that Phil is one of the most talented European musicians and composers playing in a very unique and sensitive way. But he’s also (and it’s a shame) one of the most unrecognized! Buy that great album and discover his unique touch!

Mad Men (the) – Rhythm And Sin

Holy mackerel! What a blast! I thought my CD player was goin’ to melt while listening to this second album of the Croatian Mad Men! Never a band better deserves his name. These 15 tracks are hotter than hell. From the first track “Dig This Action” to the last one which is not listed, a raw cover of the Italian rocker Adriano Celentano’s “24 mila baci” from 1961 sung in Croatian by Altic Emir and done today by Branko Radovancevic. This crazy dynamite album was recorded, produced and mastered for Rhythm Bomb Records by the german wizard Axel Praefcke. And it sounds just like comin’ from an obscure 50’s wild rockin’ combo. Listening to these guys, I caught a “Bop Disease” that you’ll probably catch you too; I’m quite sure. Would you resist to the catchy drive of “Little Franny”, the powerful “long about midnight” (what a perfect one to listen to while cruisin’ with your hot rod!), the strollin’ “Mary”, the frantic “Rhythm and Sin” (my idea of a perfect live!), the boppin’ “Saturday Night Rich”, a Presley influenced “Snap Your little finger” (that will remind you “Baby I don’t Care”), the cover of Mike Waggoner & Bops’ “Baby Baby”, the jivin’ “Big Mama”. Okay, now you’re “Intoxicated.” And ‘It’s Time To Howl” cause you’re having such a ball that you cannot help from screamin’, yellin’ and barkin’ like a rabid wolf. I easily can understand you for my neighbors called the police, and they’re now taking me away in a camisole… So long, fellows… Wooooooooooooooooooooooooo.

Rhythm Bomb RBR-5877 [2018]
1-2-3 He’s Mine – I’m a Lover – Trouble Knows I’m Coming
In – Wasting Time – Runaway Bride – Heart of Stone – Black Widow – Hey Bartender! – Let Me Love You – I Can’t Tell You I Love You – Third Man Down – Black Roses
Heart Of Stone is SaraLee’s second album. This is a Rock’n’roll album with a modern sound aiming at a larger audience than the usual Rockabilly crowd. In that, SaraLee is not dissimilar to Imelda May. Heart Of stone covers a wide range of genres and styles like Rhythm’n’Blues, Diddley beat, Rock’n’roll, Rockabilly Boogie and even a country ballad featuring the one and only Lester Peabody of the Barnshakers on steel guitar.
The modern production and some arrangements could stop those who prefer their music played in a more traditional way. That said, the curious listener who’s not against a slight commercial edge to its Rock’n’roll will find plenty to enjoy here. The musicianship is very good and SaraLee’s vocal, despite some mannerisms, is quite powerful and enjoyable.

At last, a brand new album from Shaun Young. Sure, he released some pretty good 7″ in the recent years but they were just appetizers for this main course.

But here it is. A full 12 songs albums featuring 11 originals and one cover (Someday by way of Bobby Vee and the Crickets.). But wait! There’s more! Young is not alone and he didn’t record this album with one but with two bands.

The Texas Blue Dots are Alberto Telo (Colton Turner) on drums, Paolo Bortoloiol on bass, Massimo Gerosa on piano (is there an Italian connection in Austin?) and none other than Young himself on guitar.

The songs on which they play have a strong blues influence (Someday or Got It Made with a nod to Gene Vincent’s Baby Blue in the intro) with a bit of jivin’ jazz (Baby Stop Your Jivin Me) and plain Rock’n’roll (When You Do That.) The later featuring a cracking guitar solo.

The Three Ringers are the other band to back the singer on this album. They are Bobby Trimble (of Fly Rite Trio/Boys fame) on drums, Tjarko (Ronnie Dawson, the Tinstars, Planet Rockers) on guitar and Todd Wulfmeyer (81/2 Souvenirs, Marti Brom) on double bass. The three of them also play in the Modern Don Juan. So, like with the Texas Blue Dots, expect solid musicianship.

The songs on which they play cover the whole spectrum of rockin’ music. Movin has the same tension and menace than the best of Johnny Kidd. Things Will Never Be the Same is pure Rockabilly straight from the fifties. I guess that Willie Lewis would have been proud to release this one on a beautiful 78rpm. I plead the 5th is more on the Honky Tonk side of things and so are Drink Til I Can Feel the Pain and Set Me Up.

On the Buddy Holly influenced “More than Any Tounge Can Tell” Young sings “I know that I’m not Shakespeare”, well if that title wasn’t already given to Hank Williams I would easily call him the Hillbilly Shakespeare. Since the High Noon days, Young has always proven to be a fine lyricist and this album makes no exception. Another fine exemple is the rockin’ My Heartaches Been Confirmed.

Knockout closes the album like every good rockin’ album should do: letting you beg for more.

Both bands give the best and i’d like to mention Mr Wulfmeyer harmonies that are a big part of the mix (I can’t tell you how many time I listened to More than any…) and Young’s production is nothing but perfect.

Go to Rhythm Bomb or your favorite online dealer to grab a copy of this masterpiece right now!

Wiggle Walk was recorded at the now legendary Fort Horton studios in Austin, with the Horton Brothers (Billy on the bass, Bobby on the guitar and lap steel), Dave Biller (guitar) and Buck Johnson (drums). Together or separately they played on some of the best records made this last 10 years and this one makes no exceptions to the rule. It’s a KILLLER !  I love High Noon (and it’s an understatement, believe me) but the best thing I can say about this record is that it’s not an High Noon album with other musicians and drums. Well you still have that Buddy Holly feel (Notably on Billy Fury’s My Advice and Bobby Vee and the Cricket’s When you’re in love), but also some Elvis with the brilliant I’ve found what I’ve looking for you could easily find on an Elvis RCA album (The Lowells playing the part of the Jordanaires) and Mean Mean Mean more reminiscent of the Sun days (with a feel similar to I forgot to remember to forget). Among the covers figures Little Walter’s Nobody but you Baby. Man, this boy can sing the blues too (did you ever doubt ?) and with the help of guest Nick Curran on drums and guitar you’ve got one of the many highlights of the album. Just after this scorchy blues follows the great Don’t ask me why with backup vocal provided (I guess) by the Horton Brothers. And then another change of style with The List, a great rockin’ and boppin’ song. This 37 minute album (at last something I can reproach) ends with  Rocket in My Pocket where the talent of guest piano player T Bonta shines throughout.

Between two High Noon albums, and after his debut 10”, Shaun Young, lead singer of High Noon, took some time to record his first full length featuring 12 originals and two covers (High Voltage and I’m Slippin’ In).
It was recorded in two sessions with two different bands. One took place in Helsinki in Finland with the Barnshakers for backing band, during which they cut Red Hot Daddy, High Voltage and Ricketty Shack. On this three tracks the sound is more Rock’n’roll than Rockabilly with the addition of a saxophone and a piano on Jano’s High Voltage.
The remaining songs were recorded in Shaun’s studio in Austin with Kevin Smith (string bass), Chris Miller (steel), Dereck Peterson (lead guitar), Tjarko Jeen (lead guitar) and Lisa Pankratz sharing the drums duties with Young. The core of this recording is made of Texas rockabilly quite similar to High Noon in style and quality but there are some subtle differences. For exemple She Still Loves Me evokes Gene Vincent’s Catman, If I Can’t Be Your Lover (I Don’t Want to be your Friend) is a superb honky tonk in the style of Hank Williams. Another honky tonk, but with an early Buddy Holly feel in it is How Can I Turn Her Away. Young also makes good use Miller’s steel guitar to achieve spooky effects on Phantom of Rock’nRoll. But the best song, by far, is Beg Steal and Borrow featuring Dave Bedrich on trumpet (from the Big Town Swingtet) who gives to the song a full Texas swing sound.
Superb album from start to finish.