Texas guitar slingers Dave Biller and Bobby Horton teamed up to record this all-instrumental album titled Texotica (for Texas and Exotica) for Vinylux records in 2005. Biller plays the guitar, and Horton takes the steel on most of the track except for a couple of tunes where Horton plays the lead guitar and Biller switches to electric bass. Bobby’s brother, Billy, plays the bass (and records the whole thing), Biller’s wife Karen plays the vibes, T. Jarrod Bonta plays some piano, and Buck Johnson is on drums.
It’s a varied mix of styles. Hence you’ll find Hillbilly swing (The Devil’s Birthday Party with Erik Hokkanen on fiddle, blackberry Bounce), some influences from Speedy West and Jimmy Bryant (The Sneak-A-Roo), jazz (Dutch Treat) and some blues oriented stuff (Slippin’ the Mickey, which I suspect is a reference to Mickey Baker, Texas Twilight). Also, plenty of songs justify the title and songs like Tiki Tiki, Mood Music For A Tropical Depression, and Whispering Palms sound like Hawai/Exotica/Martin Denny all rolled into one with a dash of Les Paul for the former.
This album will ideally find its place next to Biller and Wakefield’s or John Munnerlyn and Lee Jeffriess’ one.

Self released [2020]
Four Steps West – Out of Odessa – Tenderly – Cherry – Crazy Rhythm – Si Tu Vois Ma Mere – It’s All Your Fault – Mission to Moscow – When Sunny Gets Blue – What Is This Thing Called Love? – Steelin Home – Willow Weep for Me

Tom Hammel, the steel guitarist on Slim Sandy’s latest album, also released a solo album.
He gathered a set of stellar musicians, including Paul Pigat on guitar, Jeremy Holmes on upright bass, James Badger on drums, and icing on the cake, Canada’s sweetheart of Swing, the great Alex Pangman who sings Cindy Walker’s It’s All Your Fault. She already recorded this song for one of her solo albums, but this is a new version, with steel to the fore.
Besides this song, it’s an all-instrumental album.
It mixes jazz standards (King Cole’s When Sunny Gets Blue, Billie Holiday’s Willow Weep For Me) with western swing classics. Songs like Crazy Rhythm or Mission To Moscow, are not strictly speaking western swing tunes but have been popularized by Wills’ Tiffany Sessions.
The set is also really well built. Hammel alternates hot stuff on which he and Pigat trade licks like crazy with dreamy and reflective tunes (Tenderly) and mid-tempos (What Is This Thing Called Love) on which Hammel dialogues with himself, playing steel, guitar and accordion.
The arrangements are always innovative, like the accordion that echoes the steel on Sydney Bechet’s Si Tu Vois Ma mère.
It’s very well-produced and reminded me of the quality of Noel Boggs Quintet’s Magic Steel Guitar.
If you like albums like The Hot Guitars of Biller and Wakefield or Guitars in Perspective by John Munnerlyn and Lee Jeffriess, you can buy this one with confidence.
Grab a copy at https://tomhammel.bandcamp.com/releases

While the Rock’n’Roll Hall of Fame continues to ignore Link Wray, the Shawnee guitar player receives the Bear Family treatment with a 35 tracks compilation album in the “Rock” series. All things considered, he’s in a better company on the German label than with the likes of Madonna, Pink Floyd, Donna Summer, and al.
I hope Link Wray needs no introduction. His simple, straight-in-your-face and powerful guitar style influenced countless guitar players, from The Who’s Pete Townshend and Jimmy Page to Eddie Angel, Billy Childish, and Poison Ivy.
There have been quite a few Wray’s compilation albums on the market, but none as good nor as this one. And the fact that Bear managed to license sides from more labels than its competitors makes it one of the most complete too. Between Rawhide, the opening track, and Rumble the last one, and next to hits like Run Chicken Run and Jack The Ripper, you’ll find a whole panorama of Wray’s recordings between 1958 and 1965, including some lesser-known tune but by no means, songs one could consider as fillers. Among the rare tracks are songs recorded by Link’s brother under his name (Ray Vernon) and two numbers sung by Link Wray’s himself (Mary Ann and Ain’t That Loving You Baby.)
As usual with Bear Family, it comes with a thick booklet, including a story by Bill Dahl, rare photographies, and a discography.

I’m awfully late with taht review and thatt’s a shame. I should have reviewed this all instrumental album way much earlier, because it has every quality I ask to this type of records: it’s very well played (and I mean extremely well performed) and it’s short. I hear you moan “if it’s that good why are you happy that it’s short?” Well, too often, instrumental albums tends to be repetitive on the long distance with a couple of filler here or there. Nothing like that here, only the best material ended on this platter. This is just perfect.

The Star Time Playboys take their name from Bob Wills’ band which is always a plus in my book and come from Slovenia. It’s Star Time! is their debut album and it’s a superb mix of country jazz that reminds you the likes of Jimmy Bryant and Jimmie Rivers (also Dave Biller). latin beat with a rock feel, hot and fast picking, surf with a blues influence (kinda Link Wray meets Freddie King), 60’s influenced instrumental and a definitive rockabilly feel everywhere.

The rhythm section is hot and perfectly support Urban Zotei who instantly made his place among today’s great guitar players like the previously mentioned Dave Biller, but also Paul Pigat or Jinx Jones.

I wish to hear more from them in the future and I’d love to hear them try some stuff with a steel guitar.

Jeff Potter (who plays piano, guitar, drums, organ) with the help of a cast of fine musicians (including Betsy-Dawn Williams and guitarist extraordinaire Graham Tichy) offers here a very good self penned album full of piano led rock’n’roll (“High Octane”, “She’s Got A Great Big Beat”), doo wop (“She’s So Explosive” with excellent bass vocal from Tichy),ballad (“I Can’t Believe”, “It’s A Busy World”) and a couple of instrumental thrown in for good measure “Golden Roll” (a tune with a strong Bill Dogget’s Honky Tonk feel on which Potter plays organ) and the rockin’ (with a 60’s vibe) “the Romp”. You can hear the influences of Jerry Lee Lewis (of course), Fats Domino, Buddy Holly (on “Some Of The Time”) and more modern bands like The Blasters. Truly a great rock’n’roll album. 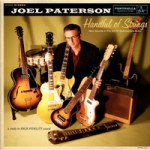 One thing is certain: Joel Paterson is a man of taste. So, when he decides to record an all instrumental album on which he plays all the instruments (he’s also a man of many talents) it doesn’t sound like all those sterile records that too often sound like a guitar method. He draws influences from all the guitar greats. The more obvious here being Les Paul and Buddy Merrill but it covers a wide spectrum of genre from the Jimmy Bryant tinged “Pensacola Rhythm” to the funky tribute to freddie King (King Freddie Blues) with jazz, rock’n’roll and plenty of Joel Paterson in between. And as usual with Ventrella the package is superbly designed. Highly recommended.