Aces (the) – No One Rides For Free

If you believe that Eric Clapton is a blues god, well, nice to meet you and see you later. But if you like your blues raw, dirty, primitive, and threatening, the Aces are the band for you. With two guitars, drums, harmonica, and distorted vocals, this California (Santa Rosa) combo plays a lo-fi electric blues with a hypnotic beat that takes its roots in the likes of Hound Dog Taylor and RL Burnside. They add a good dose of garage with a “straight in your face” powerful wall of sound. Imagine if the Cramps had taken their main inspiration in Chicago blues instead of rockabilly. But enough of comparison they build their own sound, keeping things simple and effective, no flashy licks here or 20 minutes solos, but guitar player Derek Irving keeps things varied, playing slide guitar on some tunes and sitar on others, like on “Down On The Cave” with its “Smokestack Lightnin’” inspired riff.
It’s music with guts and sweat and, in the end, a truly great album.

Big Joe Turner – The Complete Boss Of The Blues

What an excellent idea that Bear Family had to reissue this album initially released in 1956.
If you remember (so to speak), in 1956, Big Joe Turner was almost synonymous with Rock’n’roll. In January, Elvis Presley had played Shake Rattle and Roll and Flip Flop and Fly on TV. Later that year, Johnny Burnette would record Honey Hush, and of course, Bill Haley made regular incursions in Turner’s repertoire, whether on disc or stage.
Oddly enough, at the same time, Turner and his label Atlantic decided to revisit his roots and recorded “The Boss of the Blues Sings Kansas City Jazz.”
He reunited a cast of veterans whose names were associated with Count Basie, Duke Ellington, Tommy Dorsey. But the key ingredient was the presence of Pete Johnson, the pianist with whom he started to sing in Kansas City in the late twenties.
To complete the cast, Basie’s arranger, Ernie Wilkins, was drafted in to write the charts.
And of course, what steals the show is Turner’s voice: powerful as a trumpet, subtle as a reed. Turner was the man who swung the Blues and put the Blues in the swing.
With such a cast, who learned its chops by playing endless jam sessions in the smoky bars of Kansas City, it was not difficult to recreate that atmosphere in the studio, and one can hear that everyone was relaxed. Not only is the listener treated with some of the very best blues recorded at the time, but he also has the feeling to witness a reunion of old friends. This feeling runs through the whole record. Furthermore, with no commercial restrictions in mind, the band can go beyond the three minutes mark if necessary to leave more room to the soloists.
This reissue proposes the original album in two versions: the stereo mix on CD1 and the mono mix on CD2. One studio track (Pennies From Heaven) that didn’t make it in the final album is included here, as well as alternative takes, falses starts, and rehearsal. Not only you have one essential record, but you also have the chance to sneak through the door of the studio and assist in the music in the making.

As a reviewer, I try to be as objective as possible. Of course, I also like to read the booklet of an album when I receive it. And, though I didn’t know Miss Mai, when I saw that Pat Reyford was involved in the making of that platter (he plays all instruments and contributes backing vocals too), I had a pretty good feeling. But nothing prepared me for Sarah Mai’s voice. The lady blends the charm of Rosemary Clooney with the power of Ruth Brown. This Rhythm’n’Blues album is excellent from start to finish. It begins smoothly with Sentimental Journey, then slowly drifts gears, takes detours with a touch of jazz here, some doo-wop, and ends at a frantic pace with Lavern Baker’s Whipper Snapper and Ruth Brown’s Hello Little Boy. It leaves the listener breathless, knock-out, but most of all, begging for more. That’s what a good record always does; it leaves you frustrated, and you have no choice but push the repeat button.
One could moan – there’s always someone who complains – that “I Ain’t Gonna Hush” contains only covers. So what? Do you complain when you listen to Billie Holiday that she only sings covers? Of course not, you’re just happy to hear to a great performer who sings classics. The same goes here. And you can’t deny that Sarah Mai is a brilliant songstress who takes those classics (and some lesser-known songs) and turns them into her own songs, with her personality, energy, and a healthy dose of soul.
This kind of album is too rare to be ignored, so jump on it, then jump with it! 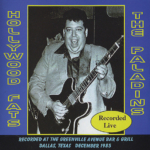 On the paper, this cd promised to be a killer. Just imagine, Hollywood Fats, one of the best West-Coast guitar player teaming with The Paladins, one of the best rockabilly/blues combo, captured live on stage in 1985, just before Hollywood Fats joined the Blasters. The setlist was exciting too. Rockabilly meets jump blues with tunes by Freddie King, Amos Milburn, Junior Parker, and a couple of Michael Mann (Hollywood Fats) own songs. Sadly, once you put the cd in the player, it’s a huge disappointment. The sound has the quality of a poor bootleg. Worst of all, the tape doesn’t always seem to play at the right speed. With this acceleration, some solos sound goofy. That’s too bad, cause the performance is excellent, and you can hear that Fats and the Paladins are on the same wavelength.
There’s enough good music in that platter to recommend it despite the sound quality.
Fred “Virgil” Turgis

The Mad Tubes are an Italian trio that plays Chicago Blues with a rockabilly attitude similar to the Paladins or the Nervous Fellas. Next to their own numbers, the songs come from the catalogs of Robert Johnson, T-Bone Walker, and Little Walter. Both the guitar player and the bassist sing which adds diversity to their sound. It’s an enjoyable release played by three excellent musicians with solid originals. The guitar sound is OK too though I’d probably enjoyed a grittier and fuller production especially on the voices that sound a bit thin.

The Nervous Fellas – Born to be Wild!

This Vancouver quartet born out of the ashes of the Rockin’ Edsels and once featuring Ronnie Hayward on double bass released this album on Nervous records in 1990. The line-up at this time was Shaun Butch Murphy on Vocals, Mark Weldon on guitar, Pete Turland on doghouse bass and John Decan on drums. This is a very good and varied album, comparable in style to the Paladins, mixing powerful rockabilly (Real Gone Lover, Steppenwolf’s Born To Be Wild), Jumpin’ Rockabilly (Get Outta This Town, Jealous Heart, Until You Come Home, Dateless Night), heavy Blues (Finally Met My Baby, I’ll Be Sorry with tons of slide guitar), and some country tinged stuff (Evil Ways).
Though it’s never been reissued on cd, it’s possible to download it legally on musical platforms via Nervous.