Sweet 50’s Rock ‘n’ Roll Promociones ‎– SFEP 001 [1995]
Don’t Take It Away – Stop, Look ‘n’ Listen – You’re Not The Best – Rockshot
After the split of Los Tornados, Anabel Moreno founded The Loneshots with some of the best rockabilly musicians on the Madrid scene, namely Diego Araoz on guitar, Carlos Lopez on double bass and Javier Sarmentero on drums. The Loneshots were the first Spanish band to play the Hemsby weekender. In 1995 they released this four-track Ep, their sole musical testimony on wax.
Three songs are originals, and the cover, Stop, Look ‘n’Listen, comes from the repertoire of Patsy Cline. Annabel is a terrific singer, and the band has an excellent traditional Rockabilly sound with jazzy and swingin’ tones that is mainly present on “Rockshot,” the instrumental that closes the ep.
After the band broke up, Miss Moreno went on to form Anabel and the Rock-a-bells while Diego Araoz and Javier Sarmentero played in the Milestones that released one album on El Toro.

Rossella Scarlet & the Cold Cold Hearts – The Day Will Come

Rossella Scarlet comes from Italy and is now living in London. She just released her debut ep on El Toro backed by the Cold Cold Hearts (I suspect the young lady to be a Hank Williams fan.) This terrific musical aggregation consists of Graham Murphy (Jump Cat Jump, Frantix) on guitar, Phil Morgan (Lynette Morgan & The Blackwater Valley Boys, Doel Brothers) on steel guitar, and Emma Goss (Sara Vista, Something Shocking) on double bass.
If you like classic country music straight from the late 40s/ early ’50s look no further, this ep is for you. Three songs are from the pen of Miss Scarlett, and Frankie Riedel wrote the fourth one (Wondering). So not only we have a pretty good singer with a vibrant voice but also a solid songwriter.
“You Were so Blind” is a superb hillbilly that has nothing to envy to Wayne Hancock. “A Painting on the Wall” is a soulful ballad with a haunting steel guitar. Though good, it could easily be one minute shorter to be more efficient.
B-side kicks off with “The Day Will Come,” another tune strongly-led by the double bass. Supported by a delicate guitar picking, “Wondering,” a duet with Phil Morgan, closes the set in beauty.

The Mad Tubes are an Italian trio that plays Chicago Blues with a rockabilly attitude similar to the Paladins or the Nervous Fellas. Next to their own numbers, the songs come from the catalogs of Robert Johnson, T-Bone Walker, and Little Walter. Both the guitar player and the bassist sing which adds diversity to their sound. It’s an enjoyable release played by three excellent musicians with solid originals. The guitar sound is OK too though I’d probably enjoyed a grittier and fuller production especially on the voices that sound a bit thin.

Piano player Mitch Woods has made quite a name on the blues/jump scene, releasing numerous albums. He also worked with legends such as John Lee Hooker and Earl King to name but two.

His touring led him to Europe where he stopped in Barcelona, Spain. There, he met one of the finest gang of blues and jump musicians : The Lazy Jumpers. Together they recorded these fine piece of jumpin’ blues, boogie woogie and juicy rhythm and blues.

Half of the 12 songs are Woods’originals, but if the credits weren’t written, you’d swear these are covers as they perfectly fit in the rest of the material. The general inspiration rangess from Louis Jordan to Jimmy Liggins, but you also find a straight blues number with Hooker’s Boom Boom (not very original idea of cover, but well played so… enjoy), a bit of rock’n’roll (the Little Richard inspired “Swell Lookin’ Babe“) and on the jazz side a solid six minute version Mose Allison’s Parchman Farm.

Another nice addition to El Toro Rhythm & Blues serie and one more evidence of the Lazy Jumpers’ talent.
Buy it here.

This is the fourth album for the Wise Guyz. This quartet comes from Ukrain. The first listen makes clear that Johnny Burnette is an obvious influence for these guys. They try to vary things by bringing a sax on “Heat”and “Hold Me Bay” but it’s not very well exploited and fail to convince like their doo wop attempts (I’ve kissed You). The constant distortion on the voice is, at the end, very disturbing and I was curious after two songs to hear how the singer really sounded. Could he sing without that artifice? It’s only on the 15th song, a gentle ballad, that his “real” voice” could at last be heard. It proves that the band should really play more in this way.

Their originals are good, but far from being unforgettable, and once again I maintain that 17 songs are way too much for a rock’n’roll album , and after 8 songs they all sound more or less the same. Too many musicians forget that Rockabilly is mainly a music made for 45’s.

For fans of desperate rock’n’roll things. 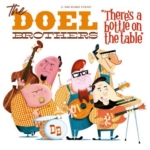