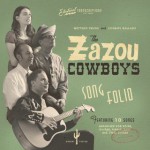 [2012]
Hot Wing Stomp – Do You Ever Think Of Me – Lonesome Flame – I Could Be Your Cowboy – I’m That Fool -Queensize Matrimony Blues – She Sets A Place For Two – Loud Mouth – Happy Trails – Rangin’
Bonus on CD:Daydream In F – Dedicated To You – Heartstring Rhumba – Fairweather Lover – Southward Bound – Little Flower – Red’s Boogie
The Zazou Cowboys are an exciting combo formed in 2008 by Chris Wilkinson and Yann Mahdjoub aka the Bonneville Barons with Willy Briggs (Lynette Morgan and the Blackwater Valley Boys, the Tennessee Rhythm Riders, the Radio Ramblers) and Rebecca Willson. Chris and Willy trade licks on guitars and occasional steel (both sing too), Rebecca adds subtle swing violin at time then switch to hot fiddle while Yann provides the backbone with his string bass.
The music they play is perfectly described by their name. The jazz and wild elements of the Zazou culture mixed with the western ballads of the late 30’s / early 40’s and of course a good dose of western swing. They releleased their debut album last year and it’s a killer both musically and visually. It comes in a nice limited to 1000 edition 12″ vinyl LP with gatefold sleeve that includes the CD.