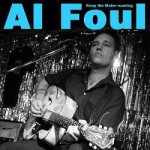 Adam and his Nuclear Rockets