If a label “classic psychobilly album” would exist, Hall Of Mirror would be among the first to deserve it.
In 1983, the split of the Sharks allowed Steve Whitehouse to fully concentrate on his new project: Frenzy. By many aspects Frenzy were more adventurous than the Sharks. It marked a new step for the psychobilly scene that was in full bloom and the band went into musical territories rarely explored by slap bass led combos. The recording of Hall Of Mirrors began with Simon Brand on guitar and Merv Pepler on drums, this trio having already released one ep for a Dutch label (included on thecd reissues of this album). But Brand quickly left the band (he later formed Torment) with only three songs ready for the forthcoming album (Frustration, Frenzy, Sweet Money).
Whitehouse eventually hired Kev Saunders to complete the album. Both Saunders and Pepler came from different musical horizons and combined with the double bassist’s rockabilly background the result was an unusual, unique and explosive combination.
Musically speaking, Whitehouse fast slapping and technique proved to be a lasting influence for the many psychobilly bassmen that followed.
Hall Of Mirrors offered originals (including a reworking of the Sharks’ Skeleton Rock) and one cover (Surfin’ Bird) probably the only weak track of the album (but who could come after the Trashmen and the Cramps?).
The lyrics also set up new standard. I addition to the usual crew of ghosts, skeleton etc. you can also find songs about madness, frustration and teenage angst.
Brilliant!

With Clockwork Toy, Frenzy confirmed their status of “Psychobilly band with more than two ideas in their songs”. The accent is put on arrangements and variations, giving more elaborated melodies (and sometimes more pop sounding) than your usual fast paced rockabilly (Misdemeanour, Clockwork Toy, Howard Hughes…). And if Whithehouse’s heavy slap bass links the whole thing to the rockabilly idiom (listen to “I See Red” – which spent some decent time in the indie charts – or “Nightmares“), the sound of the guitar doesnt owe anything to the genre. There’s a lot of production work. A powerfull live band, they also want to prove they can deliver a “real” album and not only a hastily live in the studio recording of stage favorites. These’ll remain a constant (with varied degrees of success) in Frenzy’s carreer. Retrospectivly, it sometimes turns to the disadvantage of the band and this will to explore technology shows its limits. The synthetizer’s sound on “Love Is A Drug” (yes Roxy Music’s one) or the drums on “Howard Hughes” sound terribly dated now, and let’s say it, very cheap.
But this minor flaws left aside, Clockwork Toys is as important, for different reasons, as their debut album and still stands today as a classic of the genre.
It’s later been reissued on cd with two b-sides from the same period and 3 songs from Sally’s Pink Bedroom

Nervous Records NER 033 – Raucous Records [1988]
I see red – Misdemeanour – Love is the drug 4.House on fire – Howard Hughes – The hunt – Clockwork toy – Migraine – Gotta go! – It’s All Over Now – Robot riot
In the quantity of live albums released by psychobilly bands, many were disappointing, whether they were poorly recorded (remember the Live & Loud serie on Link) or the band wasn’t able to recreate the studio recordings on stage. Among the best you find The Long Tall texans’ Five Beans In The Wheel, The Sharks’ Live In Japan, a couple of Meteors and… Frenzy’s Live At The 100 Club. Recorded in 1986, it’s a magic combination of a perfect recording and a tight band of true professionnals, playing at that time 150 dates per year. The set draws heavily into “Clockwork Toy” recorded that same year.They kick off with a roaring version of their indie charts hit “I See Red”. “Misdemeanor” quickly follows, featuring a pumping slap bass, showing how good Steve Whitehouse is.Roxy Music’s “Love Is A Drug” is far better than the album version. The keyboards parts being replaced by a guest saxophonist giving a bit of a ska touch. They alternate “straight in your face” wild numbers (House On Fire) with their more complex and melodic songs (Clockwork Toy, Howard Hughes) with equal degrees of success. Next are a couple of covers, The Ricochets'”Migraine”, The G-Men’s “Gotta Go” and a epic 8 minute “It’s All Over Now” a song previously performed by Withehouse in The Sharks’ set. This perfect disc ends with a 100 mp/h rendition of their “early” classic “Robot Riot” that almost manages to make you forget the studio version. Issued on vinyl by Nervous in 1988, it’s been reissued by Raucous in 2001.

A very good overview of the band’s seven first years including songs from Hall Of Mirrors, Clockwork Toy and This Is the Fire as well as unreleased stuff like Long Gone recorded live at Hemsby and some b-sides too. 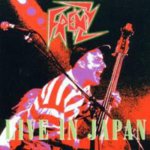 Another very good live album recorded in Japan (see Restless and the Sharks for others great live albums recorded in jpan with Steve Whitehouse) in 1993.

It’s a very powerful set with all the classics and a couple of covers like Brand New Gun (Tall Boys), Tush (ZZ Top), Nervous Breakdown (Cochran), CC Rider (Elvis) and Royx Music’s Love is a Drug.

It’s very different – and yet very complementary – to Live at the 100 Clubsince Carl Parry has a very Metal sound compared to Kev Saunders who was more ‘new wave meets rockabilly’. It sometimes a bit too much, but more often than not it works very well, even with the songs from Hall of Mirror and Clockwork Toy. 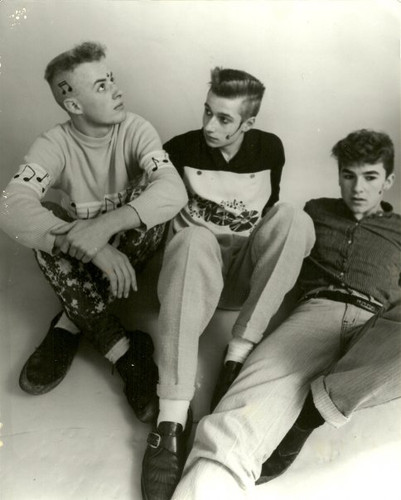