This song was co-written with Jonnie Barnett (real name Jonathan Barnett Kaye – 1946-2002) and was recorded for “Blast Off ” (first song of side B) and relesased as a single backed with a live version of Runaway Boys for the 7″. The 12″ and cd also feature I Fought the Law.
It peaked at #35 in the US Rock charts and #64 in UK.
More infos about the different releases here.
Jonnie Barnett was a singer and songwriter who started his career as a solo guitarist opening for Cheech and Chong, Frank Zappa, Eric Burdon of The Animals, Ronnie Milsap, Dion, Tom Rush, Hank Williams Jr. and others. For the last 18 years of his life, he became a well known songwriter on the Nashville music scene. He wrote songs for Etta James, Johnny Adams, Dobie Gray, Clay Walker, Hank Williams Jr., Eric Burdon, Irma Thomas, Dan Penn and many more.
“Bring It Back Again” was performed live during the 1989 tour, the 2004 reunion tour, some dates in 2007 and during the 2008 farewell tour (and this time Lee sang it lead).
Lee Rocker also performs this one during his live shows. 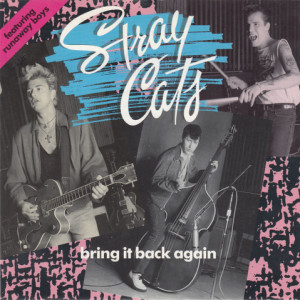 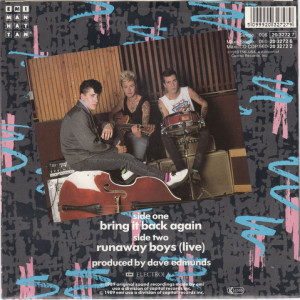 Stray Cats – Bring it Back Again 7″

‘I Fought the Law’

These Boots Are Made For Walkin’

Stop! In the Name of Love

‘Time is on my Hands’

(Slim Jim Phantom – Lee Rocker) Sung by Lee Rocker, “Time Is On My Hand” was