Dave Stuckey & the Rhythm Gang – Get a Load of This!

This is as close as any western swing band from the golden era as you can get today. As a true lover and connoisseur, Dave Stuckey (formerly of the Dave and Deke Combo) gathered an impressive ten piece band featuring Jeremy Wakefield on steel, Whit Smith and Dave Biller on guitars, T. Bonta on piano, Elana Fremerman and Eamon McLoughlin on twin fiddles, Stanley Smith on clarinet, Bob Stafford on trombone, Lisa Pankratz on drums and on basses either Kevin Smith or Jake Erwin. Together or separately these fine congregation have played with Wayne Hancock, Dale Watson, the Lucky Stars, Kim Lenz, the Hot Club Of Cowtown, theAsylum Street Spankers, High Noon, Ronnie Dawson. Impressive isn’t it? No need to say that they swing like hell. This is the perfect vehicle for Dave Stuckey’s easy going vocals (a bit like Jack Teagarden).
The set list is very solid and includes covers like Adolph Hofner’s I’ll Keep My Old Guitar, Benny Goodman’s Pick-A-Rib, Johnnie Lee Wills’ Coyotte Blues and standards like Whose Honey Are You, Nobody’s Sweetheart and Some Of These Days made popular in western swing by Leon Selph, Bob Wills and Milton Brown. There’s also five Stuckey’s originals that are so good it’s hard to tell whether they’re from the 1946 or 2000!
Billy Horton’s flawless production adds to the confusion (no need to say that it’s been recorded live in the studio).
If you don’t dance to this record, you must be dead! 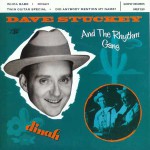 The songs of this ep were recorded during the same sessions that gave “Get A Load Of This”. Woah Babe! and Dinah are first rate western swing. Biller, Smith and Wakefield have plenty of room to express themselves on Bob Wills’ Twin Guitar Special. The last song is a swingin / rural bop version of Dave and Deke’s Did Anybody Mention My Name with superb twin fiddles reminiscent of Spade Cooley. Great.