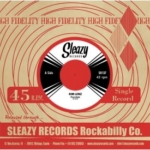 Brand new single by Kim Lenz, release to annouce the release of her forthcoming album due out in Fall 2018.
Both sides are penned by the singer. A-side is a Rock’n’roll/Rockabilly tune with a latin beat and features a nice baritone guitar part and hot sighs to boot. More surprising and unusual is I’ll Find You. This one sounds like a cross between Funnel Of Love and Shakin’ all Over.
As usual with Sleazy this is a limited edition (500.)

For her fourth album, our favorite rockabilly redhead has once again gathered a fine array of musicians whose names should speak to every Rockabilly fans: Carl Sonny Leyland on piano (who also produces), Ramon, Espinoza and Ashley Kingman on guitars, Kevin Stewart on double bass and Kevin O’Connor on drums. A couple of guests joined the fun too: Dawn Shipley sings harmony vocals on one tracks, Shorty Poole plays steel, Ron Dziubla blows his sax and James Stevens plays guitar.
All songs but two – Rikki & the Rikatones’ Whiplash and Johnny Horton’s Shadows on the Old Bayou – are originals with eight penned by Lenz and one by Espinoza.

Follow Me is more eclectic than her previous efforts ranging from Honky-tonk (Right Here With Me) to straight Rock’n’Roll with some jump-blues, jazzy stuff (the New Orleans tinged Ghost Of You that only needs a horn section to be complete) and of course plenty of Rockabilly.

One can only regret that the overall quality is marred by average and unoriginal material, like the opener, for example, though, even on these two or three songs, one can find top musicianship. Leyland, to name but one never fails to deliver the goods on piano. Her songwriting is far better on more adventurous stuff like Follow Me, Deejay, Three Cornered Heart, or the aforementioned Ghost of You. Also, on the more traditional numbers, Lenz tends to overuse of Rockabilly mannerisms like growls and falsettos that sometimes sound contrived and clichés. That flaw was already present on her previous albums, but here, it’s a bit too much. I firmly believe it would be to her advantage if she sang more simply, her voice being good enough for that.

Kim Lenz and the Jaguars – It’s all true

At last! Ten years after her last studio album (a time she employed to have and grow up a baby) Kim Lenz is back with former Jaguars Nick Curran (guitar), Scotty Tecce (drums) and Jake Erwin (double bass). Did the maternity tame her? Well, not at all. On the contrary she comes back with an album almost too hot to handle on which she penned seven songs.

Fill with high octane rockabilly (Lenz vocals and Curran’s guitar blend particularly well), it also features hillbilly harmonies (Zombie For Your Love), a bit of jazz with I’ll Tell You When written for Kim by Sage Guyton of The Lucky Stars and even a waltz, I Break A Heart Every Night, that benefits of superb harmonies from Scotty Tecce’s side band The Fabulous Harmonaires. Icing on the cake, Big Sandy contributes one superb rockabilly on which he duets with the fiery redhead and co-wrote another.

Kim Lenz and the Jaguars – The One And Only

Kim Lenz and her Jaguars – Shake a leg!

Wormtome (1000 WT 706)
Shake a leg, – Up to my old tricks again – Bop City – Minus One-Blastoff.
Awesome debut ep by one of today’s finest Rockabilly singers. Miss Lenz knows how to capture the spirit of Rockabilly, she growls, she hiccups and most of all she makes you want to bop. In that she’s perfectly helped by the Jaguars (Mike Lester on guitar, Chet Johnson on drums and Deke Dickerson on double bass and also behind the console).
Side A features two songs penned by the singer while B side is made of two rather obscure covers: Sherry Davis’ Bop City and  The Sonics (not the well known garage band) Minus One Blast Off.
Ten minutes of pure Rockabilly bliss but rather hard to find today (it was limited to 1000). 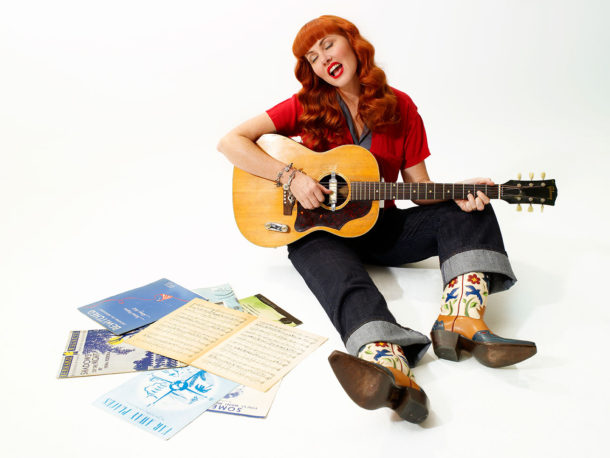