Get Smart released their debut album in 1988. Before that they had songs on Stompin’ At The Klub Foot Vol.5 and Zorch Factor vol. 1, 2 and 3. They were Roy Phillips on vocals, Rich Caso (Caravans) on guitar, Jimmy Fahy (Flip Out, early Krewmen with Carl Leyland) on drums and Johnny Bowler who later joined the Guana Batz on bass.
Their style was a mix of neo-rockabilly and blues with a touch of jazz (some even referred to their music as Jazzabilly which is a good description). It’s a very cool sounding album with good original songs but one can regret the lack of production. If it works fine on the more neo stuff like I Can’t Wait which is as good as anything released by Restless or the Nitros, it’s a bit thin on the more traditionnal stuff. With a warmer sound those songs could have been as good as, say, the early Northwood releases.. 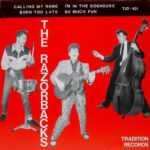 The Razorbacks – Go to Town

Not to be confused with the New jersey Rockabilly band of the same name, the Razorbacks formed in the second half of the 80’s and came from Canada.

Their debut album “Go to town” was originally released through Warner records in 1988. This is an excellent platter that benefits of the the solid production (yet very 80’s sounding at places) of guitar ace Chris Spedding (known for his work with Robert Gordon among many others) and a batch of solid originals penned by singer/guitarist Tony Kenny.
All acoustic (guitar, double bass, brushed snare), their brand of neo-rockabilly lean on the melodic side of things as if Stray Cats met Buddy Holly with a touch of skiffle that evokes at times the sound of the Shakin’ Pyramids.
Some occasional harmonies also show the influences of the Everly Brothers and there’s enough additional instruments (second guitar, accordion, piano, percussions) to bring variety the the whole album.
The cd reissue features four extra tracks including a honky tonk number with steel guitar and a cover of Ricky Nelson’s Stood Up.
A very good album that needs to be rediscovered.

The Razorbacks – Live a Little 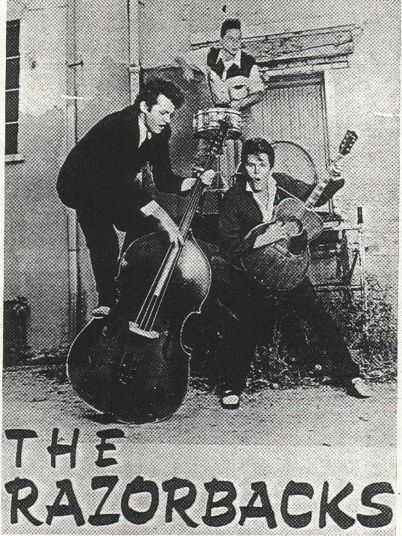