Mac Records ‎– 134 [1996]
Hip Hop Baby / All Day, All Night
Another German Rockabilly band. The Marvenells were Bernhard Ballweg on vocals and guitar, Thilo Pieper (Firebugs) on vocals and guitar, Ralf Becker on upright bass, and Michael Larisch on drums.
A side is a swingin’ Rockabilly with a hot double bass solo. All Day All Nite is more rural bop with nice vocal harmonies and nice pickin’ too.

The Firebugs were a German trio from Bielefeld formed by Jörg Plachetka on double-bass, Martin Schwedes on drums, and Thilo Pieper on guitar.
They recorded their debut single in 1990 with two original songs.
Bikerboots & Leathejackets is a super-fast neo-Rockabilly with a clean and sharp guitar solo as good as anything done by the Nitros. The B-side shows some jazz ingredients and could be seen as a neo-Rockabilly version of a song from The Threepenny Opera.

Suspicious Mainz, a word of play between Elvis’ Suspicious Mind and Mainz, the native town of the band, is by far Crazy Legs’ best effort, both in terms of sound and musicianship.
The album is a good balance between well-known covers, more obscure tunes, some surprises (Bee Gees’ Morning Of My Life and Depeche Mode‘s Personal Jesus), and self-penned tunes.
Among those are Malhzeit, a rocking instrumental, I Will Follow in their very own style and sung by Christian the drummer, Well Respected Men with a Diddley beat, Raindrops and Teardrops another one in the manner they polished all through the years and Your Love, a heavier tune that closes the platter. Close? Not exactly. If you wait a little, you’ll hear a hidden track, a second and more rockin’ version of Conway Twitty’s Lonely Blue Boy.

With 28 tracks, this cd is a good value for money. Songs 1 to 10 are studio recordings with three originals and seven covers ranging from Louis Prima’s Buena Sera to Clash’s Should I Stay or Should I Go. They’re all sung in German. My German is not good enough to tell if they respect the lyrics, though looking at the titles, I think so, but the musicianship is excellent.
The remaining tunes are live recordings, mostly consisting of covers. It’s a good complement to the studio sides.

Tally-Ho Records [1999]
Hello, Hello – Crazy Legs – Ring Of Fire – Let’s Fall In Love – Death In Neck – A Teenager In Love – Cool Hot Jump Boogie – Singing The Blues – All Fools’ Day – I Shouldn’t Love You So – Diamonds & Lovers – It’s So Easy – Wedding Bells – All State Tennessee Ball – Drinkin’ Wine Spodee-o-dee – Carol-Ann – Tennessee – You’ ll Be Mine – Rockin’ Henry – Loving You Is – I’ll Be Watching You – Too Much Drinkin’ – Folsom Prison Blues – I’m Just Living – Blue Moon Of Kentucky – Red Hot – Stella Got A Fella – Always It’s You – Since You Broke My Heart – Shirley

This 30-tracks album gathers the early recordings of the band, that were until now, only available on vinyl. In addition to the band’s first two EP’s and their debut album, you’ll find six additional bonus tracks recorded between 1991 and 1993. All but one are sung by Christian Kron, the best being “Shirley,” which also features a saxophone.

Crazy Legs – Rockin’ Out, Swingin In

Crazy Legs’ debut album features solid originals and three covers from the catalog of Johnny Cash, Carl Perkins, and Stick McGee. To be honest, these covers are not the strongest point of the album. Otherwise, it’s a very good one.
Musically, not much has changed. It’s still the same brand of neo-rockabilly and doo-wop close in style to the Keytones. The biggest difference you will find from the previous recordings is that the band is now better and tighter. The little flaws in the voice one could find in their debut ep and single are now corrected.
Their guitar player sings on “Carol-Ann” and the drummer takes lead on “I’ll be Watching You” and “I’m Just Living” (both excellent). Having three different singers brings a lot of variety to the sound of the band.

Released in 1990, this second ep is a more accomplished effort. The sound and the production are way better and each member of the band improved his musical skills. And it features four originals for only two covers.

Cool Hot Jump Boogie sounds a bit like the Ringlets Trio with a dash of early Batmobile. Marty Robbins is given the doo wop treatment. Next is a galloping neo-rockabilly number with a powerful slap bass. Christian Kron sings lead on the Keytones inspired I Shouldn’t Love You So and Buddy Holly’s It’s So Easy. Diamonds & Lovers is a gentle and very good ballad.

Crazy Legs is a German band formed by Mike Reuter on double bass and vocals, Armin Frob on guitar and Christian Kron on drums. Hello Hello is their first effort on vinyl and was released in 1989.

If a bit young in term of sound, this ep shows the potential of the band. This is neo-rockabilly in which one can hear the influence of bands like the Keytones to name but one.

The result is quite enjoyable with two self penned songs (Hello Hello and Death in Neck) and four covers. Gene Vincent’s Crazy Legs is an obvious choice and is pretty good. Ring Of Fire is sung by Christian the drummer. Cole Porter’s Let’s Fall In Love seems to be a mountain to high to climb for the band but to be honest this has too be one the hardest song to sing whereas Dion’s Teenager In Love suits them better. 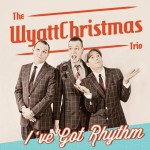 “I’ve Got Rhythm” is Wyatt Christmas Trio’s second album. It’s an interesting mix of Rock’n’Roll, blues (jump, rockin’ or classic), Rockabilly, Doo Wop and a bit of Jazz too. There’s a lot of variety all through the records. They add plenty of little things to always bring something new to each song whether it’s a different lead singer, some doo wop backing vocals (making them sound a bit like the Speedos or the Keytones), slide guitar, a couple of guest on blues harp, boogie woogie piano and saxophone, each song song different from the previous one. Some numbers have a slight pop edge that could appeal to a broader audience which is everything we could wish for them.