This excellent compilation, recorded and produced by Chris Cummings of the Riverside Trio, features some of the very best British bands of the mid-80s/ early 90s.
Formed in the eighties, The Crawdads gained a new life at the turn of the 90s with a brand new album on Raucous. Their songs on this 10″ compilation are two superb Rockabilly. This excellent band deserved to be rediscovered.
Al Holden proposes one cover and one self-penned song. His version of Tomorrow Night is more inspired by Elvis than Lonnie Johnson. Red Hot is an excellent Carl Perkins inspired Rockabilly with Cummings on double-bass.
Whiplash is a stripped-down Rockabilly interpreted by the Ricardos with a Sun feel. The Deuces Wild gives a faithful rendition of Cochran‘s Teresa, helped by Lorraine and Shirley, on backing vocals.
Side A closes with the ever-excellent Riverside Trio and their brand of hillbilly bop.
Billy Adams’ You’re the Girl leans more toward Rock’n’roll while the Mean Cat Daddies, with a slight neo feel, are the more modern band on the platter. This version of Sign of the Times is different than the one that you can find on their Nervous album.
The Roadrunners depart from their usual rocking’ blues style to record an uptempo hillbilly.

The second volume of this series is as good as the first.
The slap-bass propelled Rockabilly of the Crawdads, similar to Drinkin’ Wine Spo-Dee-O-Dee opens the ball. Next is the cover of Gene Maltais’s Raging Sea by Jesse James and the Outlaws (a very appropriate name for a wild band.) They also deliver a wild cover of Who Do You Love on side B.
The excellent Slingshots play a superb bluesy ballad (the Pain has Gone) and a Carl Perkins-tinged number (Blue Eyed Country Girl.)
Al Holden, whose version of Tomorrow Night was terrific on the first volume, returns with a hillbilly bop version of Baby Let’s Play House. This guy also released one album on Vampirette that I warmly recommend.
You can expect the best in terms of Hillbilly with The Riverside Trio, and Jimmie Rodgers’ Peach Pickin’ Time in Georgia makes no exception.
The Rhythmaires are on the blues side with Tarheel Slim’s Wildcat Tamer while the Ricardos deliver a desperate Rockabilly with Don’t Bug Me No More.
The last artist to be featured on this compilation is Walt Mitchinson, whom I don’t know much about. Sugar In My Coffee shows a strong Mystery Train influence and is just plain great.

This compilation is more than just the cd version of the two 10″ records (Riverside Rockabillies and More Riverside Rockabillies.) Though you find some songs that appeared on both albums, there’s plenty of unissued stuff from the same artists (including a different version of the Mean Cat Daddies’ Ghost Of Your Love than the one featured on their album.)
Icing on the cake, there are two songs by Lorraine and Shirley. These two sisters, who previously sang backing vocals on the Deuces Wild’ Teresa, finally have their own release. Both songs are great, in the purest hillbilly sibling tradition with superb harmonies. Baby is a fast tempo while It’s Too Late is a slow version of the Riverside Trio song.
These two songs are worth the price of this compilation alone. But the rest is fantastic too, you’d be warned.

Northwood was one the most exciting label of the mid 80’s, aiming at an “authenthic” sound before the term was coined by so-called purists. This collection gathers 20 songs, including 18 never issued before.
Red Hot’n’Blue are featured here with three songs. Sure Like The Look In Your Eyes is a re-cut of their great blues bopper with a different line-up and a fuller sound. Louis Jordan’s Caldonia is a track that didn’t make it on the album and was scheduled for a 7″. They give it a real jazz treatment by merging it with Babs Gonzales/Dizzy Gillespie’s Oop pop a da. Superb solos from every band members. The third song is a live take of Dick Penner’s Move Baby Move.
The Riverside Trio was the other great name of the label and the other band to have a full lp. Included here are two hillbilly boppers (one from their early demo and a studio outtake from their debut album) and a new version of Doppey Frutti, probably recorded to be released as a 7″.
The Blue Rhythm Boys were another great band on Northwood. Too bad there wasn’t more unissued stuff. Rollin’ & Tumblin’ comes from their 7″ and That Don’t Move Me is an alternate take of the Carl Perkins cover also present on their debut 45rpm, though this take is a lot wilder.
The Sprites (featuring Pascal Guimbard who later played with Red Hot’n’Blue) were a French band playing Gene Vincent inspired stuff. They had two songs on Big Noise from Northwood. Their cover of Vincent’s B-I-Bickey-Bi sounds exactly like the Screaming Kids.
Another promising act was the Slingshots, who were also on Big Noise. They played Rockabilly with a strong rural feel, and released their debut album more than ten years later after their debut on wax. The Crawdads who have one song here followed a similar path by releasing their debut album “On A Platter” in the early 90’s.
The Sureshots became very popular on the scene, they were and still are a solid live band and released some great albums too. Their cover of the Jiv-A-Tones‘Fire Engine Baby was released on a French ep with the French band the Jokers. This is an alternate take.
The Lonestars later evolved into Howlin’ Wilf’s Vee jays. They played rockin’ blues with a touch of jazz. With the two songs featured on the James Dean of the Dole Queue sampler Lonely Town is to my knowledge their only release.
The Four Blazes featured Pat Reyford and have one song here, a hillbilly rendition of Slim Gaillard’s Buck Dance Rhythm.
Peter Davenport is famous for his association with the Stargazers. The Roofraisers were his first post Gazers venture and featured Jacko Buddin on vocals. Bop A Du Bop A Du Bop is one of the two songs that first appeared on Big Noise From Northwood. Great Bill Haley/Jodimars inspired stuff.
This compilation also proposes an unissued songs from Rochee & the Sarnos (Woman Eater) and two songs by Fireball XL5. 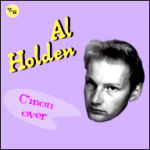 MCG1020082
Golden rocket – My baby left me – Sweet love – My happiness – C’mon over – Little darlin – Tomorrow night – Don’t come knockin’ – Leavin’ it all up to you – Just walking in the rain – Little cabin on the hill – Train train – Fool fool fool – I’m beginning to forget you – My heart will be true
An excellent album of Sun inspired Rockabilly (mostly Elvis but also Carl Perkins) featuring members of the Crawdads and Chris Cumings (Riverside Trio) on bass, steel and guitar. Half of the songs are Holden originals, the other half are covers of Arthur Crudup, Elvis, the Prisonnaires, Bill Monroe and Jim Reeves.