Ryan Cain & the Ables – Cupid and the Devil

Released in 2016, Cupid and the Devil is the second album from Ryan Cain and the Ables after My pistol Rides Shotgun in 2012. Cain formerly played with Ryan Cain and the Chaotics, who had an album on Wild Hare in 2008. Brandon Elmore, who plays bass on this album, also played in the Chaotics.

The opener is a medium Rockabilly number somewhat reminiscent of Johnny Powers. 13 Knots follows. It features a Spanish guitar reminiscent of the Marty Robbins’ Gunfighters ballads like El Paso or Big Iron. Next is a cover of Sticks McGhee’s Drinkin’ Wine, Spo-Dee-O-Dee, though Cain’s cover is obviously influenced by Johnny Burnette’s. This is not the only song that shows the influence of the Rock’n’Roll Trio. One can also hear it on Go Boy Go as well as the title track and I Call Bullshit, a frantic Rockabilly on which Cain almost ran out of oxygen.
But Cain has the excellent idea to keep things varied. Hence some songs lean more on the country and western side of things, like the Johnny Cash-tinged Keep The Change. Also, Selfie Of Your Heart is a superb country shuffle with a fiddle. And if the opening riff of Tears of Doom sounds like Tomorrow Night, the nasal voice and the fiddle firmly anchor the song in the hillbilly idiom.
Two ballads complete the set Talk To Me and Waltz Wrong with This Picture which only lacks the Jordanaires to be perfect.
In a surprising manner, the album ends with a Surf instrumental, which is good but sounds a bit out of place.

If you’re looking for a traditional-sounding Rockabilly and Rock’n’roll album with country echoes, look no further, Ryan Cain’s Cupid and the Devil is perfect for you. It’s a perfect album, produced with taste and excellently recorded.

If you are turtle, don’t try to catch this Wild Hare cause he’s running fast and .he ‘s got a double mission : “to help promote historic artists as well as promising new artists involved in the Rockabilly and Hillbilly Circuit”. Since Dave and Kiersten Moore founded in 2003 this label “of Rockabillies for Rockabillies”, they recorded historic talent such as Pat Cupp, Roc LaRue Ron Berry and Joe Penny, both present on this two “Ain’t Rocket Science” first class compilations but also new talents such as The Garnet Hearts, Thommy Burns,Jason Hoss Hicks, Amber Lee, Jerry King, Screamin’ Scotty and many more.
As announced by the owners of the label “no big city attitutes or corporate schemes here”, no “rocket science” “no tracking, no overdubs” but for sure some good ol homebrew rockabilly chemistry concocted by an ever-present Dave Moore (engineer, guitarist and member of the The Saddle Pals)
The 101 is a blend of smooth honky tonkin’ rockabilly sounds (The Saddle Pals) with some raw hillbilly songs as the ones composed by the 20’s and 30’s inspired Thommy Burns hepcat There ‘s even some Sun soundin’ with the veteran Ron Berry (listen to “It’s All Life” that could come right from the fifties Union Avenue studio) and the Steubenville Knight Jason Hicks “close to the Sun Elvis bone” melodic rockabilly
On 102 the starting mood is more on the rockin’ and rollin’ side with the terrific Amber Lee. That gal sure knows how to rock.! Jerry King and his assured strong voice that we already know with his Rivertown Ramblers is here with The Falls City Boys on a more hillbilly repertoire and sounds like an american Jack Baymoore. The legendary Hank Williams sideman Joe Penny sincere and true rockabilly is tremendous; “Real Live DollI” is a “real live masterpiece” and his Jambalaya rendition sounds like a real early fifties Cajun one popped up from the past. Screamin’ Scotty ends up brilliantly and frenetically this second compilation with a great “Don’t Talk Back” rocker.

Wild Hare07002
Where There’s Smoke – Rock! Rock! Rock! – Walkin’ The Floor – You Treat Me Mean – She’s My Baby – Back With My Baby – Lovesick Blues – Stuck On You – When You Go – Disappearing Baby
The Droptops are a rockabilly trio coming from Maryland. The members are John on vocals and upright bass, Elizabeth on guitar and Christine on drums. Yes, they are not just the “lovely girls on the cover”, they can actually play. Their sound is obviously influenced by Sun records and John’s voice shares some similarities with Jimmy Bowen. But don’t misunderstand me, he ain’t no copycat and has his own style, like Elizabeth on guitar. This album is made of 10 self penned songs (although titles like “Rock! Rock! Rock!” and “Lovesick Blues” sound familiar, they are written by the band and are not Johnny Powers and Hank Williams’ songs), alternating slow and mid-tempo tunes. If the slow ones are good, I find them more at ease with the fastest numbers like “Where There’s Smoke”. The whole cd is very coherent and the production (as on every Wild Hare productions) is very well done. If your ideal of rockabilly is Carl Perkins, Johnny Powers or today’s bands like The Flea Bops or The Raging Teens, this one will please you from start to finish.
Fred “Virgil” Turgis 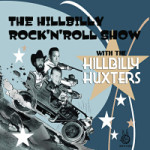 Wild Hare WH09002 [2009]
If you dig rockabilly music (which one can assumes as you read this lines) and especially 50’s sounding rockabilly the name of Dave Moore may be familiar to you. He’s the guy behind the excellent Wild Hare records label and has played on countless recordings (the liner notes say “43 professionnal releases with 29 different artists on 280 tracks!”).
This is, to my knowledge, his first real solo effort, including 12 self-penned songs on which he’s backed by Ryan Cain, Wendy Lebeau and Buck Stevens among others.
Some of this tunes have previously been sung by members of the Wild Hare roster like the Pat Cupp influenced “Blue So Blue” by Ron Berry, “Uptown” by Amber Lee and “You Better Leave” (appearing here in a very demo sounding version) by Buck Stevens.
Musically this is what you can expect – and love – from Wild Hare: a mix of vintage and raw sounding rockabilly with its feet solidly anchored in the hillbilly tradition, going from “Love Eternally” a country weeper in a Hank Williams vein to the frantic rockabilly of “I Do What I Want When I Want” all recording on vintage equipment that makes the Wild Haresignature sound.
A must have.
Fred “Virgil” Turgis

Wild Hare Records
Baby Makin Baby – Bop and Shake – I Wont Be Your Fool – Be Bop Gal – I Tried – You Better Leave – Hot Rod Ford – Mama Said – What Do I Gotta Do – My Heart Holds a Picture of You – Read Between The Lines Laurie Loo – The Hawaian Song – Rock With My Baby – Fancy Pants – Thats Right Baby
Some records are harder to review than others. Take Buck Stevens’ latest output on Wild Hare. What can I say about it but “Excellent, go buy it NOW !”. Man, what a drag, I believe I’ll have to check my dictionnary of synonims… Seriously this record is… excellent (I told ya!). It gathers sides from his previous recordings (cd’s and ep) as well as some unissued stuff. I could tell you that you can hear the influence of Johnny Burnette and the rock’n’roll trio (Bop and Shake), Hank Williams (I Won’t Be Your Fool) and Elvis (I Tried), but it wouldn’t give you an accurate portrait of this talented guy. And most of all it would leave apart a whole side of his music: his personality. Combined with first class songwriting and the great sound we’re now used to expect from Wild Hare, it just gives you a rare and precious album.
If you like your rockabilly raw, exciting with a dash of hillbilly bop, Buck Stevens is your man.