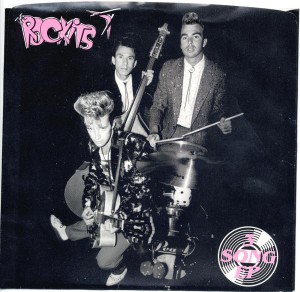 Formed in the mid-80’s The Rockits, previously known as the Top Cats, were a neo-rockabilly band heavily influenced by the earlier cat bands such as Stray Cats and Polecats. They were Buddy Dughi(Vocals/Lead Guitarist), Pete Bonny (drums), and Steve Herney (double-bass). This is their sole release, a three-song ep in pink, and black vinyl.
It contains two Buddy Dughi originals, “Cruisin’ All Night” and “TwoTimin’ Baby”, along with their tribute to Ricky Nelson, “Stood Up.” Dughi and Bonny later founded the Hot Rod Trio and Suzy Q & Her Be-Bop Boys.