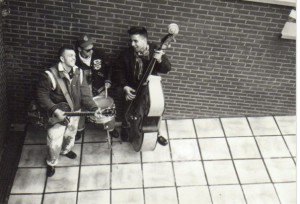 The band got together in 1986 under the name of Riot Guns (they were a quartet at that time with Michel Varga) playing neo-rockabilly. One year later, they became a trio, changed their name to The Jekills and started to play Psychobilly.
In September 1989, they released their self titled album that contains 9 songs on their own label that quickly sold out its initial pressing of 1000 copies and was re-released by Tombstone.
Another song (Père Noël s’est Vengé) can be found on the compilation album “Wreckin’ Around the X-Mas Tree”
Sadly the rise of the band was brutally stopped by the tragic death of their doublebass player in January 1991.

Tombstone [1989]
Aston – Nobody In The Street – Marilyn Monroe – Gladiators – The Girl Is Mine – You’ll Be A Priest – Psycho Beat – Dr Jekills – Ballade Du Chomeur
A short lp that is the only testament of the short career of this Belgian psychobilly band that had a bright future in front of them.
The band is clearly influenced by Batmobile both for the music and the voice but with enough personnality. The album is not flawless far from it. The sound is a bit thin at places, it’s not always in tune and there’s a couple of filler, for example “Marilyn Monroe” x-rated tribute to the famous actress (“I’d like to f*** her” doesn’t represent what I consider to be great lyrics). But at least half of the songs are very goog uptempo psychobilly numbers with good slap-bass including Nobody’s in the street, Girl is Mine and la Ballade du Chomeur that reminds of Los Carayos.
Fred “Virgil” Turgis