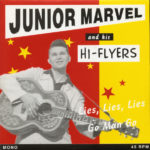 MAC 138
Lies, Lies, Lies / Go Man Go
Previously known as the singer of the Bellhops, Frank Marquez carried on as Junior Marvel and His Flyer. The Hi-Flyers were Nils Becker on lead guitar, Maiko Firefeet on drums, Mr Mactenfield on double bass and JJ Slyk on rhythm guitar. There’s no date on the cover, but I think that it came out around 1996.
Side A is on the rural / Sun records side of the Rockabilly with excellent guitar work behind Junior Marvel’s superb and period-perfect voice, tremolos, and hiccups. The flip, penned by Slyk, is more vigorous, and one can hear the influence of Gene Vincent.