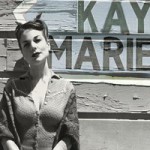 Kay Marie caught the attention of music lovers through the Golden West Trio but now Kay Marie, the girl with the golden voice, goes solo and releases a brilliant debut album. Introduced by laudatory liner notes written by Big Sandy, it’s a collection of 15 songs including 13 originals.
Though the core of the band remains the same as the Golden West Trio (Kay Marie’s brother Aaron Acquafondata on lead guitar, Kevin Morrison on upright bass and Derek McDonald on drums) the young lady – who also produced all but two songs – invited a couple of musicians to add different musical styles to each song.
After the soft introduction of  A Kiss Goodnight that features some nice jazz violin part, you’re treated with a good dose of late 50’s Honky Tonk with steel guitar with You’re so Close and Sunshine in the Moonlight that captures the spirit of the genre. And this song her voice reminded me one of my very favourite singer, the too often forgotten Ginny Wright. You’ll also find some swing, with the clarinet driven He Used to Be or more in a western swing vein Doghouse Daddy, that reminds of Bullfiddle Boogie and features Lee Jeffriess (Big Sandy and the Fly-Rite Boys) on steel. Blues is not forgotten whether it is electric (Arctic Sea), more jazzy (Can’t You See), with harmonica (You Better Listen) or blue yodel in the style of Jimmie Rodgers (Cry Baby Blues). Also on the bill are a waltz with mandolin, a Presley-esque ballad (How Can You Blame a Woman) and a Tex-mex tune with accordion, all played with the same degree of success. But I kep the best song for the end,  I Won’t Be Scared (also released on vinyl single), a fantastic song that mixes a Louis Prima beat with  a rockabilly feel, an acoustic jazz guitar solo and saxes. You’ll surprise yourself to play it again and again (also watch the excellent video she did for that song).
A very good record full of styles, talent (that voice and the band) and strong songwriting.