Billy Horton recorded these four tracks at Fort Horton studios with the rocking brunette. Tjarko Jeen on guitar, Brad Fordham on bass, and Lisa Pankratz on drums and percussions joined forces to provide the backing. You can always expect the best with Brom, and this digital ep makes no exception.
Damn Little Demon is a mean rocker, the kind of stuff at which she excels. You Broke the Rules, sees Bobby Horton joining the band on vibraphone for a 60s-Phil Spector type of song complete with a whole array of percussions.
Tjarko is entirely at ease on the bluesy Hurry Home while Get in the Car Loretta is more Rockabilly sounding and shows the influence of Grady Martin.
Digital only.
Go to https://forthorton.bandcamp.com/releases to buy it right now! 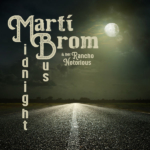 Marti Brom is by far one of the finest singers on the roots music scene, and I said singer, not “female singer.” She seems to be able to do whatever she wants with her voice, and it even seems easy.
That said, I was slightly disappointed with “Not for Nothing,” her 2010 release. Marti’s performance was, as usual, top-notch but I found the production uneven.
Nothing like this here. Recorded in Sweden with a gang of talented Swedish guys (and a couple of guests like Rosie Flores and Chris Ruest), Midnight Bus is perfect from start to finish.
Nine out of the sixteen tracks are from Marti’s pen; the others are covers. But cleverly, next to classics like Slippin’ and Slidin’, Little Ole Wine Drinker Me or the title track, Marti had an excellent idea to include songs from today’s artist. Thus you can finds songs from Crazy Joe (Last Ten Years With You), Kathy and the Kilowatts (Loveaholic) or the late great Nick Curran (Drivin’ Me Crazy.)
From Damn Those Little Demons, a bluegrass tune only available on the vinyl version, on one end to Ambush, a sixties soul number with organ, on the other, “Midnight Bus” covers a broad range of styles. But thanks to the production, it manages to remain coherent and sounds like a whole.
There is a good dose of solid rockers like “Come Destroy Me,” “Last Ten Years With You” or “Mama’s Little Baby Was A Rockin’” which features a solid rockin’ piano.
Album after album, Brom proved she was more than at ease to sing country songs. This one makes no exception. “Lie of a promise” is a traditional honky-tonk with fiddle and steel. As I said before, she makes it sound so easy, and I thought how great it would be to have her cut a single with the Country Side of Harmonica Sam. Labels if you read this. “Push Me Till I’m Gone” is more in the Cash vein and “Lasso Mr. Moon” is a superb country shuffle with a cracking guitar solo.
Talking about guitar, Chris Ruest provides a mean guitar on Curran’s It’ Drivin’ Me Crazy while Mattias Bruhn hypnotically tickles the ivory. “If If Was A Fifth” brings a welcome touch of Jump and West coast blues.
Tunes like “Midnight Bus,” “Stilleto in Black,” and “Belly of the Beast” are the perfect vehicles to hear the intensity and emotivity of her voice. The latter is a mean and menacing rocker that sounds like a cross between Johnny Horton’s “Lover’s Rock” and “Funnel of Love.”
With that album, Brom really reached a new level with her songwriting. Combined that with her always-spectacular voice and a stellar backing band and the result is one of Brom’s very best platter.

Available at Enviken , Raucous, Tessy or other fine dealers.

Marti Brom – Not For Nothin’

“Not For Nothing” is not only the return of Marti Brom but it’s also the return to life of a legendary label: Ripsaw. For this album, the rockin’ brunette gathered a cast of musicians of the Washington DC scene.
The opening track – Finders keepers – is a cover of Wynona Carr on which she’s appropriately backed Del Pushert (who toured with Elvis) on sax. The singer does a great job, and it’s good to hear her on this genre of tune. Get A Little Goner, the following number finds her in familiar territories. It’s a twangy honky-tonk number featuring Bill Kirchen. It’s by far the best track of the album with Arty and Linda Hill’s Mascara Tears a straight honky-tonk on which her Patsy Clyne’s voice does wonders. In the same vein, you’ll find Something Blue from the pen of Teri Joyce. The Austin songwriter wrote some of the best songs ever sang by Brom and this song makes no exception. The title track, penned by Sean Mencher, features an organ. The arrangement is perfect until a weak, distorted guitar solo ruins the song.
Pat Brown’s Forbidden Fruit is way better and the solo more inspired.
Bobby Sharp’s Sweet Baby Of Mine could have been excellent. It’s a groovy number in a similar vein than Hit the Road Jack with saxes but once again the guitar could be a little bit more subtle. Globally, one can say that the weak point of this album lies in the rockin’ numbers on which the guitarist can’t help but over playing, and to make things worse, with a bad sound. Strangely, for a singer that delivered some outstanding rockabilly numbers this album works better on the country or blues-inspired numbers. But as they say, every rule has its exception and “I Get the Blues When It Rains” is the perfect demonstration of that. They try to give it a western swing touch but end sounding more than Asleep At The Wheel rather than Bob Wills. In the end “Not For Nothin’” is only half convincing, but I wouldn’t say that Brom is to blame, but the problem comes from the band. You can only regret her previous albums on which she was backed by members of High Noon or the excellent Barnshakers.

I heard about this “Heartache Numbers” project a couple of years ago, and was very interested in the concept. Each track is a song containing the number of it’s track listing on the CD. (for example: Track #7- «7 Lonely Days», Track #9- «Apartment #9», etc.) HOW CLEVER!!! And it ends with the unlisted track- «Heartache By the Numbers». Okay- so Marti’ gets kudos for the concept of the record alone. Even though I usually have gripes with records that are all covers, this is an exception because of the clever concept and the fact that it is Marti’ Brom and she can pull it off. I was thrilled to find it was no longer just a «concept», and that the recordings were finally finished and released in time for the Oneida 50’s Fest. I had to get a copy. I have always been a Marti’ Brom fan, no matter what she does. Every record is different for her, but she has such an impressive range, she can master a multitude of musical styles. Still my favorite Marti’ recordings are her country ballads. Imagine- a whole record of country ballads by Marti’! The emotion of these songs perfectly showcases her ability as a singer. I don’t know much about 60’s Country, but I was turned on to the genre when I lived in Austin, TX, where it is a staple. I miss the honky-tonks where I could have a tear in my beer, but this CD brings it all back to me. My only warning to listeners is that, if you are drinking while you are playing the CD, you will probably be crying by the end. Remember that the title is «Heartache Numbers».There is only one Patsy Cline cover on the record, but the obvious comparison to her vocal stylings is still evident. Like Patsy, Marti can yank at those heartstrings with her dynamic range and emotional vocal manipulation. (Marti- don’t get offended about another Patsy comparison. It is definitely a compliment from me.) Vocally, this record is flawless. It is, in my opinion, Marti’s best vocal performance on a recording-and all of her recordings are superb. And, as always, she has selected the best backing musicians for the genre. (Bobby Flores- fiddle, Justin Trevino and Kevin Smith- bass, Debra Hurd- piano, Levi Mullen- guitar, Dickie Overby- steel, Buck Johnson and Lisa Pankratz- drums) If you like 60’s country, it doesn’t get any better than this! When I am drinking alone, I am going directly to this CD for company.To top it off, the «Maven of Style» models a «Cari Lee» original creation on the cover- a saloon-girl style satin/fringe dress! (I thought Cari Lee was a singer- how did she have time to become a kick-ass seamstress as well? I want my own «Cari Lee» dress!). Plus, the liner notes are by the one and only Wanda Jackson! You know it must be good if the «legends» are raving about it.

In conclusion, Marti’ is still my idol. Buy all of her records!