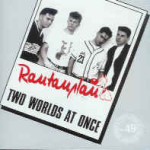 Rantanplan – Two Worlds At Once

Link Records / Anagram  [1990]
Rantanplan ~ Watch Me Goin’ Off ~ Unknown Girl ~ Go Out Cherie ~ Bad Games ~ Container Love ~ Chinese Boy ~ Liberty Baby ~ Riding To Nowhere ~ My Bed Is Too Small ~ Inspite Of No Feet ~ Bikini Girls With Machine Guns.
Rantanplan, whose name comes from a famous French comic strip character,  never claimed to have big ambitions and played mostly for fun (and I suspect for free booze too). However they managed to have one album out on Link in the Chuck Flintstone serie which is reissued now on Anagram/Cherry Red.
This album is very representative of the psychobilly sound one could hear in the second half of the 80’s with a light sound (here, very light due to the thin production) and the slap bass to the fore. The result is neither good nor bad, it’s just average. It’s mainly due to the production, the lack of a good guitar player able to play solos and original numbers that are not very… originals. The booklet contains detailed liner notes with a history of the band. .