In 1990, Bang Bang Bazooka (Marcel Hoitsema: vocals and guitar, Francois Besson: guitar, Bart Gevers: double bass and Rene van Lersel: drums) released their second album.
Like their Dutch counterparts and labelmates, Scam and Cavemen, Bang Bang Bazooka counts among the numerous bands influenced by Batmobile, which is especially true on a song like Frankenstein Rock that could easily find its place on Sex Starved or Hard Hammer Hits.
But they developed a more aggressive brand of neo-rockabilly by adding elements of Metal and Glam Rock (hence the presence of Crimson Moon, a cover of T-Rex) and even some Boogie Blues.
The guitar is powerful and very present but can sometimes be a little bit intrusive.
That’s a good record, very well produced by Dick “Hardrock-abilly” Kemper with some excellent original songs.

Count Orlock Records
Living Dead – Haunted House – Silver Surfer – Stone Age Beat (Wilma) – Wilderella – Is It Over – The Car – Devils Road – Vampire – Indian Style – Jericho – One More Chance – Do Do Ta Ta – Don’t Need A Job
Drowned in the mass of psychobilly releases in the late 80’s, this too often overlooked album deserves to be rediscovered today.The Cavemen played a very pleasant kind of soft psychobilly that was still very anchored in its “billy” roots, quite similar to their compatriots of Batmobile and Archie. The songs are good and varied, helped in that by the presence of two lead singers. Particularly good are “Stone Age Beat” (that quotes the Flintstones theme), “Silver Surfer” and “One More Chance” a humoristic slow number with outrageously fake cries .
Very enjoyable if not revolutionnary.
Fred “Virgil” Turgis 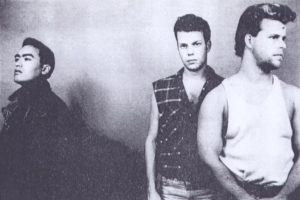