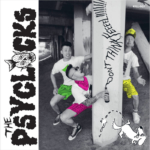 The Psyclocks are a psychobilly trio from Japan. They released their debut album in 2011 and this fine little ep in 2015 on Killjoy records.
They can be seen as the Japanese answer to Demented are Go, their singer having the same kind of gravely voice than Sparky. Musically the band is very good with clean guitar, a powerful slap bass to the fore and tight arrangements.
Radioactive Baby is pure psychobilly. Everybody Stomping has a rockabilly vibe in it. Zombie Walk is excellent and alternates slow and fast parts with a superb and very well recorded double bass.
The cover of Mickie Most’s That’s Allright concludes the ep on high note. They keep the spirit of the song but turn it into something completely insane, sounding like Sparky backed by the Meteors.
Great stuff. If you like classic Psychobilly, you’ll love it. It’s guaranted to make you stomp all night long. 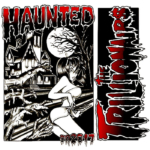 Killjoy records – Kill 023 [2017]
Haunted – Alohol
The Trillionairs are a German neo-rockabilly/psychobilly quartet. After a short dialog taken from what I assume to be a old movie (though I didn’t recognize it), Haunted kicks off. Two guitars, one with a distorted sound and another with a more rockabilly sound, a powerful slap bass completed by superb drumming (the band’s secret weapon), and on top of that a fierce and aggressive voice. With a change of pace in the middle, this is first class psychobilly.
B sides takes more or less the same ingredients, including fine drums breaks too, but is slightly faster. That’s all I love and I ask from a band : tight musicianship, good songs and more than two ideas for the arrange them.
500 copies (400 black, 50 red and 50 white) 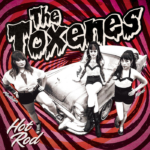 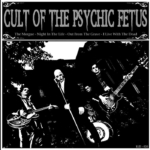 Spook’n’roll, Gothabilly, Macabre surf ? How would you describe Cult of the Psychic Fetus ? What about god damn rock’n’roll (you know the kind of stuff that don’t save soul) ?
Listening to this fine 45, I thought that this was the kind of release that haunts Dave Vanian in his wildest nightmares.
The Morgue has a good twangy vibe with the almost spoken sepulchral voice. Night in the life is less rockin’ and more atmospheric. On the flip is Out from the grave, a bass led tune completed by an organ. And, since we already lost all the so called purists, I can say that I live with the dead almost brings a touch of cold-wave to the mix of influences. 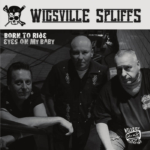 Killjoy records – Kill 022
Born to ride – Eyes on my baby

Wigsville Spliffs formed in the early 80’s with Ian Aitken on vocals and guitar, Mike Lister on double bass and Danny Mowl on drums. They split in 1987. During that time they appeared on numerous compilation albums but never had a single or an album of their own. Years later, in 1996, Raucous records released a cd gathering old songs.
Finally the band reformed in 2008 and their first proper album saw the light of day in 2011. Shortly after that Aiten left the band.
One could feel the worst with the loss of such a pivotal member. Instead the band kept on going and now have Spike Arrow who played with Frenzy and the Rapids on guitar on vocals. With Paul Richardson on drums, the trio recorded this killer single for Killjoy records.

Side one is penned by Arrow and has a strong psychobilly edge, powerful yet rocking and melodic. The flip is more familiar. Eyes on my baby, written by Aitken appeared on the band’s first demo in 1982 and on Dance to it in 1984 (or so). This is a brand new version. They kept the neo-rockabilly vibe but added a good dose of energy. Both are very good.
Hopefully we’ll get more releases and a full lp from this line up soon.
500 copies (400 black, 50 red and 50 grey)
Available here and here
Wigsville Spliffs on Facebook 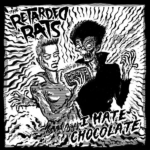 The Retarded Rats – I Hate Chocolate

The Head and the Axe – Survival

A broken record player coupled with a busy schedule delayed the review of a batch of vinyl records I received from Killjoy records, including this single from the Retarded rats. And just when I finally can review it, I hear the news that they decided to take a break . Rats !

Killjoys is known for its colored vinyl releases and cassettes. This single makes no exception to the good taste of the label. It comes in a beautiful gatefold sleeve, nicely designed and illustrated with… a flexi disc inside. Yes you read well, a flexi disc.
For releasing such beautiful objects, Flatty and Anna Killjoy deserve all our respect, admiration and support (in other words : buy the discs !) But they deserve all of that and more  for another simple and obvious reason : their music.
A side could be described as psychedelic-psychobilly, not that surprising for a song about voices in the head that lead to a hatchet in a skull.
B side is more rocking with a slight western twang. It also features pretty good lyrics too. Like everyone I like songs about vampires, ghouls and zombies but I was pleased to find more personnal and almost reflective lyrics that find a strange echo with the news of the band calling it quit.

The Retarded Rats – Screams from the 10th Planet

I sometimes fear that I don’t have the legitimacy to review Psychobilly albums. After all, I stopped following the evolution of the genre since the mid 90’s, when bands began to incorporate too much elements of metal, hardcore or were just playing punk with a slap bass. But the Retarded Rats LP came as a nice surprise. I first thought that the main reason was due to the sound that brought back my teenage year. But it was much more than that. And simplier: the Retarded Rats are a pretty good band.

With the feet firmly rooted in the classic Psychobilly tradition of the mid 80’s/late 90’s, this trio (Gordon melmac on drums, Flatty Killjoy on guitar and organ and Anna Killjoy on doublebass and lead vocals) from Leipzig, Germany, takes the genre one step further without denaturing it. Without a doubt the light guitar, the slap bass (a real slap bass with warm notes and a wood sound, not that horrendous metallic clicking sound one too often hears) and even the voice of Anna, the female lead singer (I couldn’t help but think about Something Shocking or Dypsomaniaxe) belong to the what is usually described as old school psychobilly but the melodies, the songs (all originals) and the arrangements are 100% their own.
By no means are the Retarded Rats a nostalgic band playing a music of the past. They have too many good ideas for that. The sound has a lot to do with that too, it’s raw – recorded live on 8 track reel to reel – but not dirty (well, okay a bit dirty, but just what it needs, see what I mean)

In the end the best way I can find to describe this excellent combo is the title of one of the best songs of the album: neo-psychobilly.
Like Rockabilly, Psychobilly saw a lot of 80’s bands reforming in the recent years to play weekenders, that’s a good thing (who wouldn’t like to see legends?) but I firmly believe that the future of Psychobilly lays in bands like the Retarded Rats who bring new blood and ideas but remain faithful to the genre.