Slim Sandy and the Hillbilly Boppers – Rolling and Tumbling

The latest Slim Sandy and the Hillbilly Boppers is made of the same combination of hot rustic bop, hokum, jug band and hillbilly harmonies as the previous ones. However, there are some differences in the mix.
More than half of the tracks feature the great Tom Hammel on steel guitar. Hammel and his instrument really bring something unique to the band. Also, you’ll hear a double bass played by Clark Brendon on a couple of tracks. It’s not that I dislike Willa Mae’s washtub bass, far from that, but having a double bass deepens their sound and brings diversity to the set. One will hear an excellent bluesy rendition of I Hear You Talkin’ sung by Willae Mae among these tracks.
There’s also a great gospel with the Carter Family’s Meet Me At The Moonlight.
Gettin’ That Lowdown Swing and Rompin’ and Stompin’ were recorded with French musicians, namely Bombo Lolo Tongo on steel, Colada Jones on piano and Max Genouel on guitar. The band goes for an early Western Swing style that suits them perfectly on these tracks. I’d really be curious to hear them try stuff with a horn or a clarinet a la Arnett Nelson.
This is the great talent of Slim Sandy and his band. Despite a somewhat limited arsenal, they always proposed something new and exciting, whether by finding new ways to play old songs or adding guest musicians. 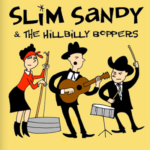 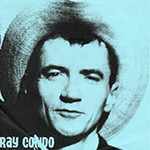 Ray Condo – Sweet Love On My Mind bw/ Big Dog, Little Dog
Ray Condo Records CP007
This is a posthumous single gathered by Ray’s friend. Side one is the classic Johnny Burnette tune given the Hardrock Goners treatment, something like «wild rockabilly meets Hank Williams». B-side «Big Dog, Little Dog» is a song recorded during a rehearsal by Ray and his last musical project, featuring Stephen Nikleva (The Ricochets), Ian Tiles and Tony LaBorie, just a few months before his death. I may be wrong but the only other issued song from this line-up can be found on a tribute album to Alejandro Escovedo. A great piece of wildness (imagine Dee Dee Ramone goes hillbilly).