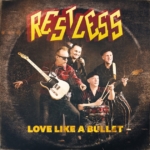 In the recent years, Restless went back to their mid 80’s quartet line-up consisting of Mick Malone on guitar, Jeff Bayly on bass, and, of course, Ben Cooper and Mark Harman, respectively on drums and guitar and vocals. This line-up gave us the best (the Vanish Without a Trace ep that I hold as one of the best neo-rockabilly records ever made) and some different stuff, to put it mildly, with After Midnight.
Penned by Cooper, Love Like A Bullet starts with the band shouting “Gotta Give me your love” that reminded me of the opening of What Can You Say?. But my fears quickly vanished (without a trace) when the tune evolved into a rip-roaring boogie blues with a modern edge. The result is both a classic and a contemporary song.
The b-side, penned by Malone, is exclusive to this single and won’t be available on the forthcoming album, which is a reason good enough to buy it, but the quality of the song is another good reason.
These two songs augur the best for the album that will be released in 2020. And since the band has decided to call it quit, it will probably be their last which is very sad. But if all the songs are from the same wood, Restless will leave the scene on a very high note.

This album, with the Sharks‘ Live in Japan and Frenzy‘s Live in Japan tends to make me believe that the best live albums are recorded in Japan with Steve Whitehouse slapping the double bass. If the Meteors Hell in the Pacific could easily prove me wrong on the first point, the Blue Cats’ On A Live Mission certainly confirms the second.

In 1989 Jeff baily left Restless and the band considered calling it quit. But with a tour of Japan scheduled, Ben Cooper and Mark Harman decided to hire a temporary bassist, namely Steve Whitehouse, to honor the booking. As Mark said in an interview to Deathrow “If Steve had said no, then if would have almost certainly been the end of Restless. Thankfully he said yes and after five minutes of rehearsing we went to Japan.”

The result as I said is an excellent live album with a surprinsigly tight band – considering the condition this line-up embarked to the tour – that plays all the classics (you can check, they’re all here) with carefully choosen covers and more unusual stuff like People Love A Show, a song that previously appeared on the b-side of Ice Cold.

Recorded by Pete Gage and mastered with the help of Alan Wilson you can’t go wrong in term of sound. Most of all this recording perfectly completes the other live albums released by Restless.

The choice of Whitehouse proved to me a pretty good one since the band recorded three studio albums, including the excellent Movin’ On, with him. 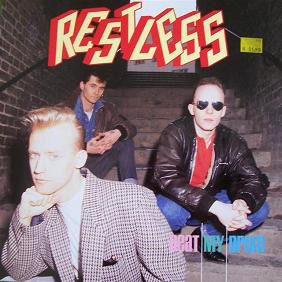 In late 1987, Mick Malone left Restless, and the band was back to a trio again. It didn’t weaken the group, and the following year, Harman, Cooper, and Baily were back with a vengeance with “Beat My Drum.”
Maybe they thought that after the heavy produced “After Midnight” they had something to prove, but it found Restless in fine form.
“Beat My Drum” sounds like a perfect mix of the band’s first three albums. You can find the neo-rockabilly of “Why Don’t You Just Rock?” on “Do What I Do,” the modernity of “Do You Feel…” on “Get It While You Can” and the pop edge of “After Midnight” in their covers of Radar Love and Neutron Dance. But most of the time, helped by the clean production of Pete Gage, all these influences merge to create a unique style that will be Restless sound in the forthcoming albums.

Restless – Live at the Klub Foot

Recently Alan Wilson (of Western Star and the Sharks fame) found a box full of tapes recorded at the Klub Foot, the mecca of Psychobilly and Neo-rockabilly in the mid-80’s. These tapes needed to be restored and cleaned, a very costly process and two of these shows (Batmobile and Sting Rays) were released on Anagram/Cherry Red Records. Sadly the sales weren’t enough for the label and they called it quit. Knowing he had history in his hands, Wilson created a sub-label to his own Western Star to keep on releasing this stuff.
The second release in the serie concerns another well established name on the scene: Restless. I don’t think it’s possible to find someone who doesn’t like “Why Don’t You Just Rock?” or “Do You Feel Restless?” They made a name on both rockabilly and psychobilly scenes. When this gig was recorded in September 1984 they were at their finest, the line-up being original members Mark Harman on guitar and Ben Cooper on drums plus bassist Jeff Baily and, freshly recruited, Mick Malone on second guitar. The quartet plays killer tunes one after another (with the exception of the Phantom’s Love Me which doesn’t fit them well – sorry Mark you’re not a wildman). This set even features an original that never appeared on a studio album and written by Malone.
Buy it at Western Star

Back in college, thanks to a friend, I discovered Restless chronologically. I was blown away by “Why don’t you just Rock?” and amazed by “Do You Feel…” After that, Paul Harman left the band, which was joined by Jeff Baily on double bass and Mick Malone on second guitar. This line-up released “Vanish without a Trace,” one of my all-time favorite modern Rockabilly recordings.
Then, the quartet released “After Midnight.” I was young and dedicated to Rockabilly body and soul. I didn’t understand it and, you know how you are when you’re a teenager, I felt betrayed. Did Restless sell out? Nevertheless, I kept on buying Restless records, and the following albums were, to my relief, more to my tastes.
Now years have passed, I’m older – my quiff is far long gone – and, I hope, wiser. I decided to revisit “After Midnight.” And I was pleasantly surprised. More than that, it’s actually an excellent album. Sure, if you expect “Why Don’t You Just Rock part. 2” you’ll be disappointed, but if you approach it with an open mind you’ll be rewarded with solid melodies and some of Mark Harman’s best guitar parts (listen to the way he jumps on the solo of the title track for example.)
The band also had the ambition to go beyond the Rockabilly label. “After Midnight” featured more adventurous songs in terms of melody and arrangements, hence the presence of horns, accordion, synths, and keyboards of all sorts. So, yes, maybe they pushed it too far at places, and the production, especially now, seems dated, but you can’t blame an artist for having the will to create.
In 1990, Madhouse reissued the album under the title “Kickin’ Into Midnight.” It is a remixed version without the horns and most of the arrangements. It’s quite good, maybe more rockin’, but to be honest, I wonder if I don’t prefer the original mix. Anyway, it’s good to have both.
So if you think that anything that Elvis recorded after the Army was crap, you can live without that album, but if you’re curious, open to new melodies, and not too allergic to the production sound of the ’80s, you’ll find plenty of good things. 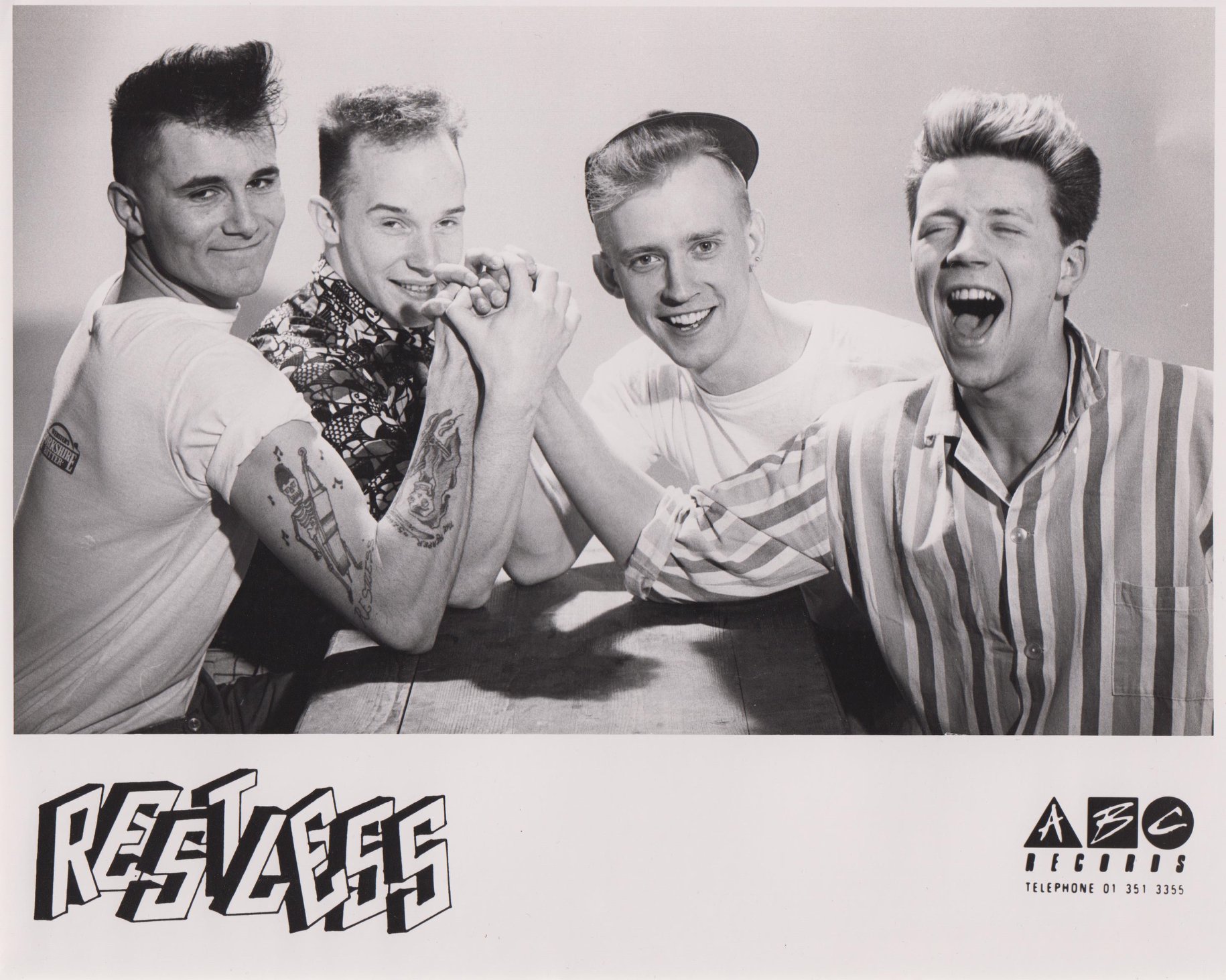 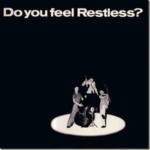 Restless – Do You Feel Restless?

Released in 1984 on Nervous records, Do You Feel Restless is the second full-length album from the British trio. It sounds like the modern counterpart of their debut album, with songs that Nervous could have judged too adventurous to be included on their debut album. Ben Cooper, the drummer, takes the lion’s share in terms of songwriting with seven songs out of twelve (the cd reissue features fifteen songs.) The other tunes are covers (Alabama Jailhouse, Baby Please Don’t Go, Sixteen Tons), and one song penned by Mark Harman (Bottle on the Beach) and another by the whole band (Crack Up And Fall to Pieces.)
While Why Don’t You Just Rock remained in the boundaries of Rockabilly with very few modern elements, Do You Feel Restless explore new territories. It flirts with Psychobilly at places, adds a touch of Reggae (Here I Am), and thus creates a new brand of modern Rockabilly that will be their trademark in the following years.

Restless – Why Don’t You Just Rock

Restless have a problem: their first album was perfect. One could argue that this is not such a big problem and many bands would like to have such a problem. It became a problem for them when they never managed to recapture the magic of that first album (though Do You Feel… came close).
Why Don’t You Just Rock was like a lightning in a bottle. The band had it all: the songs (mostly penned by singer and guitar player Mark Harman), the talent (with Harman’s guitar everywhere but also a tight rhythm section made of his brother Paul and Ben Cooper on drums)  but also the freshness and some form of carefree attitude that you have when you’re a teenager and you play that kind of music. Thus, they brought something new to the genre, making a lively album that rocks, bops, swings and rolls. A 80’s equivalent to Gene Vincent and the Blue Caps (a huge influence on the band).
There’s no need to do a song by song review, each number here is almost a classic: the title track, Ice Cold, Yellow Cab to Midnight, High Time (with its crazy jazzy guitar), Long Black Shiny Car. Unlike many they’re not afraid to play a ballad (Morning Comes Slowly) seriously.
And if you still need to be convinced, just count the numerous band this particular album influenced. They are legions. Restless, with Why Don’t You Just Rock, almost define, with the Blue Cats and a couple more bands, what neo-rockabilly is.