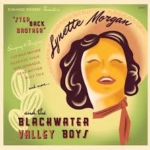 Lynette Morgan And The Blackwater Valley Boys – Step Back Brother