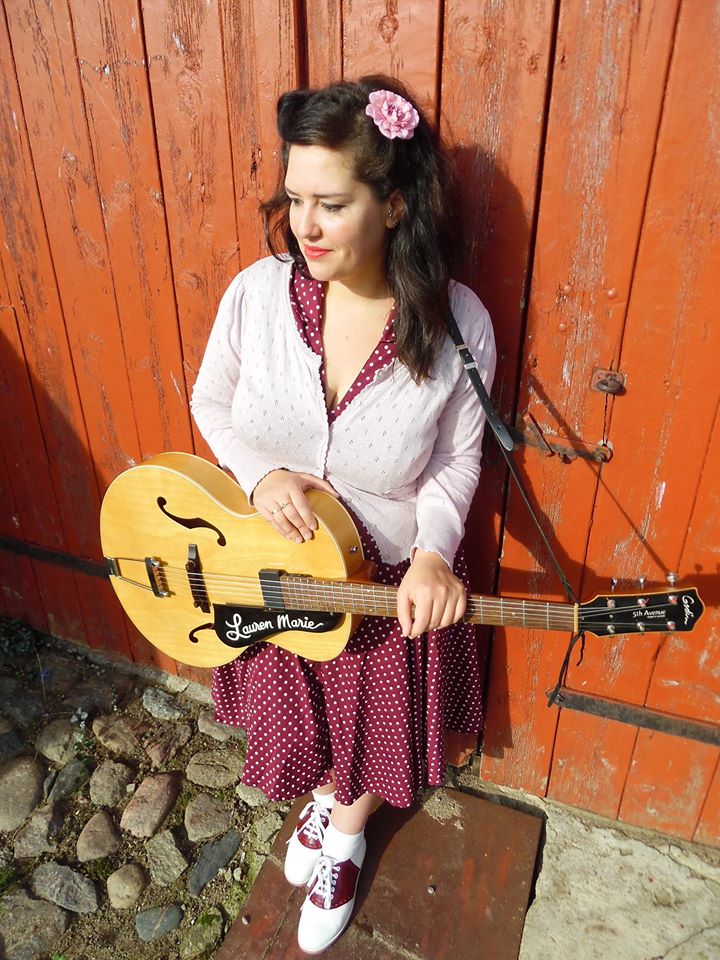 Here’s an interview I conducted a while ago (2006 or 2007) for my previous website (jumpingfrom6to6.com) after miss lauren Marie released her debut album. Since it took place she released two more albums and moved to Europe, but I thought there was plenty of infos that shouldn’t be lost, so here it is again.
by Fred “Virgil” Turgis

You now live in Austin, but I think you come from Cape Cod ? Is this where you grew up?
Lauren Marie I was born on Cape Cod and lived there untill I went to college. My family still lives on the Cape. I went to Art School in Beverly MA (thirty minutes north of Boston) for two years then I transfered to UMASS Boston and lived in Cambridge and Somerville for three years. Then I moved here.

Was this a good place to see live bands and find good music?
Lauren Marie The Cape doesn’t have too much in the way of Rockabilly and Rock & Roll the way we know it. Certainly no Western Swing or any sort of Roots music. It’s a weird isolated place.

What kind of stuff were you listening to in your childhood?
Lauren Marie Growing up I listened to what my Dad listened to. He’s kind of like me in the way he’ll like anything as long as it’s good. But all sorts of stuff from Blues to
Rock & Roll and later some Country. Then I got into the Punk Rock music when I got a little older. About the same time, I started listening to Elvis and Johnny Burnette when I was in middle school and all through high school. But I still listened to punk music.
Boston had a whole lot more for Rockabilly music. When I was younger, I’d go to the punk rock shows in Boston and when I went to college it seemed as if a lot of the punk crowd had turned toward rockabilly and psychobilly.

What are your earlier memories concerning music?
Lauren Marie Well my first concert at Otis Air Force Base on Cape Cod was the Beach Boys. It was a really good show.

I can read in your bio that you listen to Johnny Burnette “since you’re 14”. As this is not the kind of music you can easily hear on the radio, how did you find about him?
Lauren Marie A lot of punk rock music I bought was on vinyl. I accidentally came across the Elvis Presley record first and I really liked it. So the next week I went back to that section in the record store and found a Johnny Burnette Trio record. Accidental destiny I guess. ha ha

Having experienced that situation, I suppose your schoolmates didn’t listen to that music…
Lauren Marie Not really but I hung out with the punk rock kids. A few of which liked Elvis and and bands like the Cramps and the Stray Cats.

Does any of your relatives had any influence on you to sing rockabilly and country?
Lauren Marie Nope. That was an accident too. But since I’ve started singing, my Grandma has told me she wishes she could have been a singer. And my Dad always sings the way that I used to, around the house, to himself, whatever. My older brother sang in school growing up. I never did but I sang while I did the dishes and laundry, and to myself around the house. I believe you started singing with The Two Timin’ Three, how did you meet them?
When I met Eric Laufer of the Two Timin’ Three a little over two years ago. I was at a bar and I knew who he was because I had seen him play. I started dating a friend of his. Later that summer I was at a party and he heard me sing. I was kidding around because I had had too much to drink. A week or so later he came over for dinner with Shane Kiel. Long story short, once they got me liquored up enough to sing… They said I should come sing with thier band sometime. They called me to practice and I started sitting in on thier gigs more and more. I stopped being nervous after a while. Then I got the bug and came to love singing.

Why did you move to Austin?
Lauren Marie I moved with the Two Timin’ Three. I needed a change and I wanted to be with them.

Let’s talk about your debut album. It has that late 50’s sound that gives a very distinctive sound from most of the current rockabilly albums. Is this something you worked with Billy Horton?
Lauren Marie Billy is awesome. But don’t tell him I said that! Kidding! That guy really knows what he’s doing. I gave him my input and just kinda let him do what he does. I knew I was in good hands.

How was it to work at Fort Horton, with all those talented musicians : Dave Biller, Buck Johnson, T Bonta…?
Lauren Marie Friggin Amazing! I still get a smile on my face thinking about how great they all are. I feel very lucky to work with such incredible musicians.

How did you choose the covers you play?
Lauren Marie Some times people give me suggestions, and make my cds of stuff to listen to. I come across a lot of them just listening to different things. I always have an ear out. If I find myself singing a song, I’ll usually bring it to Bobby Horton or Eric to help me work it up.

Bobby Horton and Eric Laufer (Two Timin’ Three) wrote some originals. What about you? Do you plan on writing your own songs? Did you make some attemps?
Lauren Marie I try but I’m not very good at it yet. I realize it takes practice so I’m not discouraged. I’m learning to play guitar so that helps a whole lot. Hopefully on my next album, I’ll be able to do more than sing. ha ha

As a fan of Janis Martin, have you ever met her or played with her?
Lauren Marie I met her in Green Bay last year but I was so star struck I could hardly breath or talk. I cried I was so happy. Eric dragged me by the arm and said, “Janis Martin! This girl loves you!” It was really funny. I have my picture with her.

Do you want to add something?
Lauren Marie I’m happy that people have really seemed to like what I’m trying to do and and I’m so thankful for it.
Did I say thanks? Well, THANKS 😉

‘That Someone Just Ain’t You’

That’s a classic one I often ask, but I’m always curious to know how you discovered