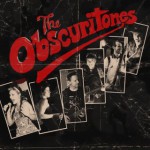 Brockwell Records BRKR1
Angel Eyes – HS Baby – 15 Seconds – Bad Mood – Rockabilly Boogie – Jim Dandy – Vapour Club Boogie – This Little Girls Gone Rockin’ – Genocide Blues – Brockell Beach – Dumb Luck – Molly Broom
The Obscuritones are a London sextet fronted by two female lead singer (Joey Hill and Gaby Romano) . The rest of the band consists of Hugh Byrne and Samantha Kidman on guitars, Andrew Bavington on double bass and Phil Casey on drums.
I first came across their name while browsing on youtube and to say the truth I wasn’t that impressed but I was probably in a bad mood because after listening to their debut album I promptly revised my judgement. These guys and gals are good. They play rockabilly but they doesn’t sound contrived or limited by the genre. They approach it with a free and open minded attitude that is refreshing when most of the bands try to either sound mean or more authentic than Charlie Feathers (or both!). To give you a slight idea of their style try to imagine the sweet harmonies of the Miller Sisters backed by the Stray Cats . As said before, they are not limited to Rockabilly, bringing a touch of surf here and there (especially with Sam’s twangy guitar on the surf instrumental Brockwell Beach), a more country tinged number (Molly Broom) and 80’s neo-rockabilly/psychobilly with Andy Byrne’s Vapour Club Boogie and Genocide Blues that he also sings (he also duets on the excellent Dumb Luck).
On the twelve songs that make the album you’ll find three covers (Rockbilly Boogie, Jim Dandy and This Little Girls Gone Rockin’ originally performed respectively by Johnny Burnette Rock’n’Roll Trio, Lavern Baker and Ruth Brown) the remaining nine songs are originals with every member (except for bassist Andy Bavington) having penned at least one song.
All in all an excellent debut album (they also have a vinyl single on Rydell Records with Angel Eyes b/w Rockabilly Boogie).
www.theobscuritones.com/