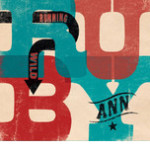 Billie and the Kids – Jukebox Daddy