The Mean Cat Daddies – Ghost of your Love

The Mean Cat Daddies were a Rockabilly quartet from the North West of England; They took their name from Harold Jackson’s song of the same name.

They released their one album titled “Ghost of your love” on Nervous Records in 1994. The Mean Cat Daddies were Tony Huyton on vocals and acoustic guitar, Andy Bolton on lead guitar, Gary Maguire on double bass and Johnny Gribbin on drums.

The opening track is a solid modern Rockabilly tune. The next song shows a strong Buddy Holly influence to it complete with the appropriate drum pattern and a bit of Joe Meek production. “Sign of the Time” is a very interesting number, being a Rockabilly number with a social comment about the difficulty of finding a job in Great Britain. “Why Do I Cry” is another highly melodic song with strong double bass and a bit of country and western influence. “I Can Tell,” the sole cover of the album is pretty good. Andy Bolton sings both “Decision Time” a very modern song, and “Am I the One” that brings a touch of blues with slide guitar.

They sure know how to write melodic tunes as prove “Tell Me.” In a similar vein, you’ll find and the title track. It’s described by Roy Williams of Nervous Records as a song that “would have worked well in a French art-sex film of the mid-Sixties.” Why not, Roy? They’re also more than able to rock, with the hard-hitting Rockabilly of “Midnight Cruise.”
“Losing Game” is more classic Rockabilly with powerful slap bass while “Waitin’ for You” is another highlight sounding like Johnny Cash meets Chris Isaak.
It’s too bad that the Mean Cat Daddies only released this one album. They knew how to craft highly melodic songs and were very originals.

Better late than never as they say. It’s never been so true. First I should have written this review a long time ago. Then because Saint Dom took 30 years to release this album.

The band originally formed in 1983, featuring Simon Badminton who later formed Spook and the Ghouls, and disbanded in 1987 their only recording legacy being some demos.

In 2011 they reformed with Peter Turner (Sureshots, Johnny and the Roccos) on double bass and Mark Coppin (Sureshots, Sugarpuff Demons) on drums. In early 2016 they finally started to work on an album and two years later Holywell Dene was born.

And let me tell you, that was worth the wait! This is one of the very best neo-rockabilly album I’ve ever heard. Not “the best of 2017” or “one the best of the decade”, no I repeat: one of the best I’ve ever heard! It can stand proudly near anything released by Restless, the Sharks or the Blue Cats.

All twelve songs are penned by Dom Malia (aka Saint Dom) who’s not happy to be a mighty fine songwriter and one hell of a singer is also an ace guitar player (listen to Cat Feet their instrumental.)

The album kicks off with Get up and Get Out. Man! If I had to explain what is modern Rockabilly to someone who doesn’t have a clue, I’d surely use this song and the Blue Cats’Man with a mission.

After such a strong opener you have to be good. And Saint Dom and the sinful are! The songs follow one after another always bringing something new. Some are very close to Psychobilly like Mr Saint or One Foot in the Grave. Others are more traditionnal like Cause I Do (with a riff similar to the Moonlighters’ Broken Heart) or the title track with its powerful slap bass. It must be noted that the slap bass is particularly well recorded; You can hear both the slap and the bass and the sound is warm.

A bit of glam can be heard on Ghost Town (maybe it’s the intro that makes me say that) and some boogie blues on Jenny Won’t Play No More with guest harmonica player Scotswood Slim. Talking about guest, Steve Clark of the Neutronz can be heard adding a touch of Mark Harman influenced guitar on some tracks.

If at this point you didn’t understand that you should order this record without delay, I guess one of us has a problem… No seriously, order it right now! 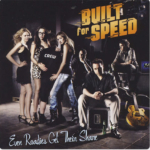 the Duke – I’ll Get You – Where Are The Groupies – Hot Rod Hell – Eat You Alive – I’m Glad, Glad – Too Many Guitars – Just A Rumour – Old Car Blues – I Thought I Was Over You – Rock ANd Roll – Why Do You Treat Me This Way – I Wanna Be A Millionaire

Built For Speed come from Norway and play an excellent brand of modern rockabilly with, its’s no surprise with such a name, influences from the Stray Cats.
You can hear that a lot of work has been made in the studio to get a good sounding album (not just a bunch of friend who record a rehearsal) which is very important with this style (I think).

The first track of the album sets the pace: Gretsch guitar led instrumental, with slap bass and double bass drum pedal with a slightly western feel, as good as any Reverend Horton Heat tune of that kind (think “Big Sky”). “I’ll Get You” adds a touch of melodic Punk (kinda reminded me of The Queers) to their rockabilly. “Where are the groupies” is not only well played (with a nod to the Stray Cat’s Give It To me in the solo) but also features some darn clever lyrics too (I picked up the guitar cos I figured joining a band might be my only chance / now, the ugliest athletes you can imagine get supermodels in bed / so if I’d known then what I know now, I would’ve played football instead).
Psychobilly-blues is the word I’d use for “Hot Rod Hell’. More in a traditionnal blues vein “Eat You Alive” wouldn’t be out of place in The Paladins setlist (yes it’s THAT good) and features a brilliant solo from Anders. Their cover of Lloyd Price’s I’m Glad is no less excellent, still with a blistering guitar part. Totally their own and totally respectful to the original in the same time. The country beat of “Too Many Guitars” is perfect to take your breath. Featuring a piano, “Just A Rumour”, is a Dave Edmunds type of rocker and you’ll find a Mystery Train / Setzer feel on “Old Car Blues”. “I Thought I Was Over You” has a structure of a good old Honky Tonk song with a neo-rockabilly sound, and man I love that. A piano and and a sax are used to transform Led Zeppelin’s Rock’n’roll into a rockin’/rhythm’n’blues number featuring once again blistering guitar solo and screamin’ sax. “I Wanna Be A Millionaire” has a bit of Setzer in it but also reminds me of a great combo of the late 80’s, the Nervous Fellas, mixing rocking blues with hard hitting rockabilly. Also featured as a bonus track an amazing, ears blowing, balls shakin’ version of Motorhead’s The Ace Of Spades.
Excellent!

Leroy and the Rockets
Rockabilly Rollercoaster

Prestige Elite Records CDSGP 1313 [2012]
Challenge – Dianne And The Gypsy Queen – The Old Man Is Down The Road – Swordfish – Memphis, Tennessee – Goin’ To Chicago – Remember Me – Summertime Blues – It’s All About Me – That’s Life – Livin’ This Way – Dangerous Man – Shaking All Over – Witchcraft – Love Roulette – Strange Business – When You Were Mine – Zippin’ Pippin – Bad Moon Rising – Mars Attacks (Venus)

Rockin’ Rocket 88 has lived, here comes Leroy & the Rockets. But if the name changed, the line-up and the quality remain the same. There’s just a slight evolution in the sound, something like a more modern approach. Of course this is still roots oriented music, mostly rockabilly but with elements of blues (Goin’ To Chicago), hillbilly (Memphis Tennessee and Summertime Blues with a fiddle) and obvious references to the pioneers like Elvis (Dianne and the Gypsy Queen) or Johnny Cash (Remember Me). But they really aim to create a brand of music for the 21st century. To achieve their vision they asked Stevie Paul to produce the album. Paul is as far as you can imagine from the Rockabilly world having worked with Rod Stewart, Mary J Blige, Toni Braxton, Edwin Starr, Mike & the Mechanics to name but a few. His fresh approach mixed with the band’s background results in a brand new sound: something like a mix between the Blue Cats from the Tunnel era and Chris Isaak’s rockingest material.
With artists as Kitty Daisy and Lewis or Imelda May touching a large audience, it would be justice that a band which plays this music for more than 25 years, even if it was under another name, obtains a little recognition.