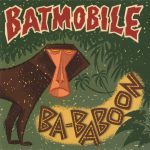 BabaBoon is a tribal tune with a jungle beat and could be seen as a follow-up to Bambooland. The B-side is more traditional. This revved-up rocker with handclaps is guaranteed to make you bop. 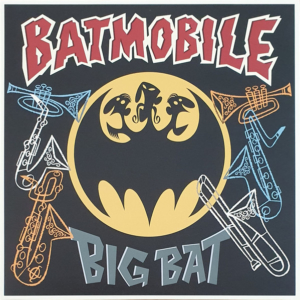 What a surprise! Batmobile released a 10″ mini-album with a six-piece horn section (three saxophones, two trumpets, and one trombone.) Most surprising, it works. The arrangements are superb and carefully done. The horn section is fully integrated into the trio. It really adds something and completes the sound of the band.
From the new version of Transylvanian Express to the sinister Man with the Shovel, with the “mariachi meets psychobilly” sound of Walkaway Baby and the country-tinged Go On in between, without forgetting the 100% Batmobile sound of Beast and Ain’t Got You, this mini-album is perfect from start to finish.
It’s a limited edition of 1500 copies in transparent yellow vinyl. 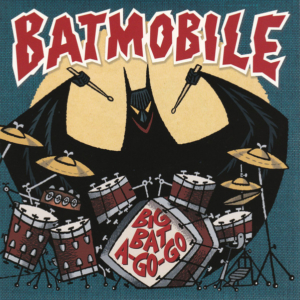 Two more songs recorded with the Bosco Horns.
The A-side is a cover of Sandy Nelson and is a tour de force by Johnny Zuidhof. The B-side is a new version of Hammering previously released on Hard Hammer Hits.
Limited edition of 1000 individually numbered copies on yellow vinyl.

In 1986, three young boys from the Netherland arrived in London to play on the stage of the psychobilly mecqua, the now legendary Klub Foot. They play in front of hundreds of psychos who discovered that night one of the best, most beloved and most influential psychobilly band : Batmobile. This is this historic day this album gives us the occasion to hear.
For many years the tapes of this gig were considered lost or destroyed until someone found them and under the guidance of Alan Wilson (God or anyone else bless him) they were restored and saved.
So here you have the whole set, 13 Batmobile classics from their mini lp and “Bambooland”, with a booming sound that does justice to the band energy and captures the excitment of their youth.
Considering that Batmobile never released a live album (though they issued two live videos) this is definitely a must have. And the historical aspect of the whole thing will make you forgive the occasional out of tune and trembling voice. Just remember that was their first gig abroad, so you can imagine they were anxious.
The package is completed with informative liner notes and interviews. And as Alan Wilson interview suggests, some recordings from other bands exist and we can only hope it’s going to be the debut of a long serie.