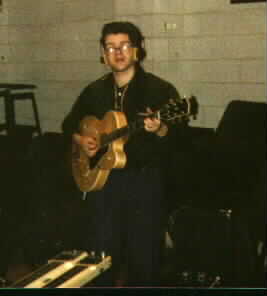 Peter Davenport left the Stargazers in the Summer of 1982 and formed this band around 1984. The first line-up included Neil Barnet (vocals), Russell Gillam (double bass) John Tuck (drums quite possibly the same who played with Paul Fenech in Dynamite around 1978 and now with The Rapiers), Chris Gardner (piano, clarinet, sax) and of course Davenport on guitar.
The band played some local gigs then the line-up evolved, featuring Jacko Buddin (Flying Saucers, Dynamite band and later vocalist with The Comets), Andy Dunnet (sax) with Gardner concentrating on piano. They recorded two tracks at University of East Anglia concert hall/studio in Norwich for Northwood Records that appeared on the compilation album “Big Noise From Northwood” in 1985 (Northwood LP NWLP1002 [1985] Reissued on cd on Downer Records [2000]).
Both Bop A Doo A Doo Bop (“one of my silly songs” as Davenport once said) and Let’s Loose Those Blues were written by Davenport.
As you can guess they were heavily influenced by the Jodimars and Bill Haley and it’s too bad they didn’t record more songs.
They disbanded around the first half of 1985. Gardner (a Bill Haley expert who wrote articles, liner notes and gathered the essential Bill Haley database) teamed again with Davenport in 1988 when the Stargazers re formed.