Wild Roosters – Take It Off

Despite a very distasteful cover (front and back) I really enjoyed Wild Roosters’ latest effort. These Swedish guys are on the scene for quite some time having played with Snakebite, Crossfire or Wild Bob Burgos. As you can easily guess with this pedigree, they play Teddy Boys rock’n’roll with a sound close to Cavan’s Our Own Way Of Rocking. They have good originals and also give a breath of fresh air to well chosen covers (including Burgos’Ride On Rebels). You’ll find the usual anthems about bikes (Motorbike, Demon Riders), girls and Teds with the soon to be a stage classic “Forever Ted”. They sure won’t change the face of Rock’n’roll, but you’re guaranteed to have a good time.

The Honky Tonk Pounders are a German rockabilly trio featuring Gunnar Fick of the Ringlets Trio. They formed in 1996 but this is only their second release, so you can see this guys take their time when it comes to go into the studio. Actually only five songs are totally new. Ten of the fifteen songs here have already appeared on a 10” mini album but it’s good to have them on cd format. The result is a solid set of 15 originals with varied styles. The backbone of this collection is made of wild and mean rockabilly (Devil Bop, Rockabilly Pearl), with some country ballads (Sea Of Tears and You’re The One with a steel), Gene Vincent styled rockabilly (Hot Rod), neo Rockabilly that takes you back to the Ringlets Trio days (Boom Boom), boogie (Bad Hair Boogie that features a piano), blues (6th Street Rumble).
The Honky Tonk Pounders influences comes from the classic rockabilly masters (Burnette, Perkins) as well as today’s bands : Freight train Running shares a similar riff to Deke Dickerson’s Wear Out The Sole Of My Shoes, I Know That You Love Me strongly made me think of Big Sandy’s Thru Dreamin’ and you can hear a Derailers influence in Bad Luck.
Fick whose prowess on the slap bass with the Ringlets Trio never ceased to amaze, proves he’s also a very good guitar player and the other two members provide a strong rhythm.
All of these contribute to make a highly enjoyable album.

Produced by Supersuckers frontman Eddie Spaghetti and with a bass player proudly sporting a Motorhead t-shirt, don’t expect the Number 9 Blacktops to play doo-wop.
This is raunchy and straight-in-your-face rock’n’roll with big guitar (Skinny Jim their singer-guitarist is endorsed by Gretsch), warm and round bass (electric, that is) and hammer-pounding drums. Imagine a hard hitting rockabilly band ingested, digested and regurgitated by ZZ Top, add a dash of surf (there’s a couple of instrumentals), a bit of early Reverend Horton Heat and a solid dose of country-punk ala Jason and the Scorchers and you’ll get a close idea of the sound of this album. And the whole thing is rounded in less than 30 minutes. Yes, this is Rock’n’roll! Highly recommended though clearly not for the purists.

This German quartet (guitar – double bass – drums – sax) plays modern rockabilly and rock’n’roll at a frenzied beat that sometimes borders on old school psychobilly (when the “billy” was still present). The saxophone brings a very personal touch and gives them a sound of their own, but if I had to make a comparison, I’d say they could be the little brothers of Hot Boogie Chillun. You’ll also hear some Sonics influences too.
Formed in 2005 they’ve waited 5 years to release their debut album and it shows. They are very well rehearsed and tight. You can hear that a special attention has been put into the arrangements and the sound is powerful, far from your usual “let’s release a record 2 months after we got together…” one often finds.
The other positive point is that 12 of the songs are very well crafted originals.
Nervous Breakdown take every good aspect of 80’s neo-rockabilly and take them into the 21st century for a sound that owes nothing to the past. A band to follow.

Hang Him High was supposed to be the band’s first release but Pin-up, the original label, decided to cease releasing records once the recording finished. It’s only years later that Part got the rights and finally issued it, hence the subtitle “early recordings”. But “early” doesn’t mean “amateurish”. By the time of this recordings they’re already accomplished musicians (listen the guitar solos). They deliver a set of mostly original songs (including two in German) completed with four covers with the solid musical cocktail made of 2 parts teddy boy rock’n’roll, one part country and a dash of skiffle played with a no-nonsense approach. Sure it sounds a bit young compared to later albums where the band was more experienced and also benefited of a real studio and they sometimes try to catch a fish too big for them (Unchained Melody) but Hang Him High is nonetheless very pleasant. You can also hear that they worked hard on the vocal arrangements (Country Roads). Good debut.

First issued in 1999, “Angel Heart” the band’s second album appears here in a brand new mastered version and it’s a winner. This now well established German sextet plays Teddy Boy / British revival inspired rockabilly (think Shotgun, Riot Rockers, Crazy Cavan, Flying Saucers, Matchbox) with a solid dose of country music and even a bit of skiffle provided by the presence of a washboard player. Most of the songs are self penned with the accent put on the melodies. There’s also a few selected covers: Wayne Walker’s All I Can Do Is Cry, Johnny Kidd’s version of Casting My Spell, Cliff Richard’s Dancing Shoes and Gene Vincent Over The Rainbow (yes this Teddyboys have a heart beating under their leather jackets). Musically, the rhythm section is solid and provides the perfect ground for the two guitar players. Their solos are sharp and most of all originals. Those of you who are not stuck in a 50’s conception of the rockabilly thing will sure find a lot to enjoy on this great reissue.

With the exception of Crazy Cavan who is above all (and to quote the Foggy Mountain Rockers “It’s wild, it’s weird it’s crazy Cavan and he’s the pope”) the Foggy Mountain Rockers are of one today’s best Teddy Boy gang. They write solid originals played by first rate players with original ideas.
“Rock’n’Roll Philosophy” counts among their very best album. Just listen to the way the guitars interplay on “It’s Not to Late To Rock’n’Roll”, the harmonies on “Pain Hurts” or the melody of “Be Apart” (and strictly between us how many Teddy Boy group can you call “melodic”?). They alternate Rock’n’roll anthems built for the stage with mid tempos with equal pleasure. There’s also a lot of country stuff added to their music (“the Fog”), the western tinged “Illuminati” and a nicely done tribute to Johnny Cash.
Handle at your own risk, this is rock’n’roll music! 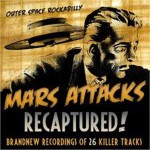 Part Records PART-CD 696.001 [2011]
Man From Mars – Snatch It ‘N’ Grab It – All Nite Boogie – I’m Gonna Buy Me A Ticket – Doggin’ My Steps – Please Can You Say – Pepperhot Baby – The Way I Bop – That’s The Way I Feel – Four Tired Car – Lies – Why, Jimmy Bill – You’ll Never Break Me – Honey – Dirty Tricks – I Guess It’s Meant That Way – Rocket In My Sky – Shotgun Wedding – A Gal Of My Kind – Ninety Nine Ways – You Talk Too Much – Sputnik (The Satellite Girl) – Tattoo Bop – Mars Attacks – High School Ceasar – Leavin’ It All Behind
Mars Attacks are one of the best ambassadors of Rockabilly music in Europe. For this album they have re-recorded some of their favourite songs (including the covers!) from their earliest releases. Though surprising at first, it turns out to be a good idea, most of their old material being is only available on vinyl or out-of-print. So why not reissuing it with today’s sound? The result is 26 killer tracks. It’s no use to write a song-by-song review, you just have to know that these guys are top musicians.
If you already know Mars Attacks, you know what I mean, if you don’t, this is the perfect album to begin witht.