Ghost Train is the brilliant second album from this German trio. In 2009 Unleashed their debut album was full of promises; it’s nothing to say that Ghost Train confirms all the hopes placed into that band. For this record they benefit of a better production with a fuller and a bigger sound that blasts through your speaker like a rocking thunder. Their music sounds like a mix between Brian Setzer 68 Comeback Special, the Reverend Horton Heat and the Quakes, with elements of Chicago Blues, metal (ah that powerful guitar on the Beatles’ Come Together), latin beat, twisted western soundtrack (Ghost Train), country jazz (Woodpecker Song) and surf with a Russian beat (Chernobilly twist). The choice of the covers is very good too (Billy Idol, Golden Earring, Beatles, Andrew Sisters). Highly recommended.

Bo Diddley once sang “You can’t judge a book by lookin’ at the cover” and he was wise. Keeping that in mind I put the debut long player of 777 (Triple Seven) in the player despite a cover design that first gave me a negative feeling. Boy, was I wrong! This album is excellent. These three boys come from Germany and play neo-rockabilly as if they invented it. They write their own material and they’re pretty good at that. Sure, maybe one song or two lack of originality but I’ll always prefer a rock’n’roll band that writes his own stuff rather than hearing the classics covered again and again.
Brian Setzer and the Stray Cats are obvious influences on the trio. But “influence” doesn’t mean “carbon copy”. The trio brings enough of its personnality, and sometimes even a pop sensibility, in the mix to develop a sound of their own. Nikolai Potter is a strong singer and a very good guitar player too and he’s perfectly supported by his two partners in crime, Oliver Leggewie on drums and Franz Stiegemann on double bass. A very good surprise. 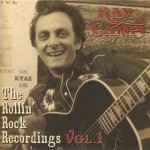