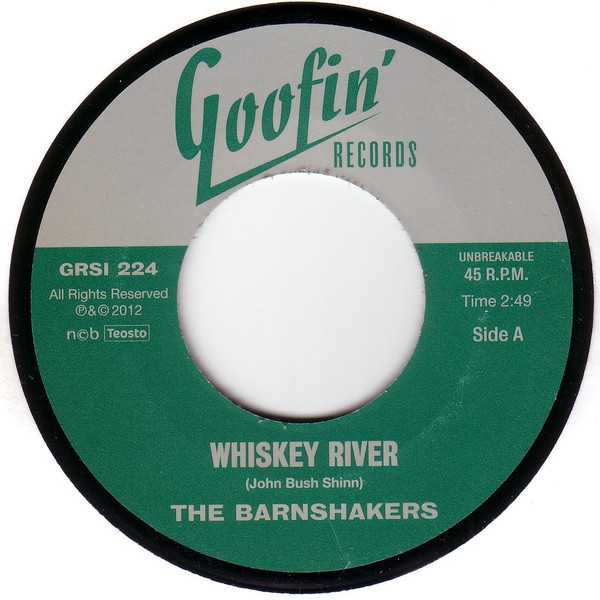 Another excellent single released by the Barnshakers. The A-side is a cover of Johnny Bush’s Whiskey River, also a hit for Willie Nelson. They deliver a superb muscled-up version with powerful slap bass and intense vocal by Vesa.
The flip is an excellent Rockabilly with harmony vocals, typical of the style of the band.

Very good mini cd from the Barnshakers, one of the best, if not the best european band in activity made of one studio track and seven live recording. The studio track “Twenty One”, a Vesa Haaja’s own, is an immediate addictive song with its great vocal and lead guitar part and the piano support. This song proves how right they were to add a piano in their line-up. The live show, with the exception of “Wiggle Like A Worm” is made of covers and songs that were never recorded in the studio by the band. This gives another interest to this record to hear them playing classic songs by Wynn Stewart (Come On), Lew Williams (Bop Bop Ba Doo Bop) and Carl Perkins (Everybody’s Trying To Be My Baby). The set ends with a frantic Vesa singing and screaming on “Yah! I’m Movin’” and “Wiggle Like A Worm” with Lester playing Burlisonnian licks. By far the best cut of this record. An advice, if you want it, you should hurry as the cover states it’s a limited release…

The Barnshakers – The Single album

It’s a good idea to issue all the Barnshakers singles on one cd as some are not that easy to find. You can also see the evolution of the band through the years from the rockabilly of the beginning to the addition of a piano player and the touch of boogie of today. The first single shows what a good songwriter Jussi Huhtakangas (aka Lester Peabody) is, too bad he doesn’t write more songs. Vesa, the lead singer and main writer wrote my two favourite songs on the cd issued from the Xmas single «Desperate Santa» and the great «Santa’s got a brand new pedal steel». You got some covers too and a song penned by Shaun Young. So what could you ask for more ? Unissued material ? You’ve got it, two new songs recorded in 2004. So I guess you understood this record is a must have for all Barnshakers and rockabilly fans everywhere.
Fred “Virgil” Turgis