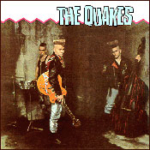 Despite its cover, a nod to the Stray Cats, the Quakes debut album has little, or nothing, to do with the Long Island trio.
The music they play on this album is a mix between hard-hitting Psychobilly and hardcore. The songs are powerful, the rhythms are basic, and the distorted guitar plays short and straightforward solos.
The album contains a couple of classics like Pack Our Bags and Go, Psychobilly Jekyll, You’re Dead and Where Did It Go. Certains songs also show a deliberate choice to avoid the usual Psychobilly clichés like ghouls, zombies, and cemeteries. 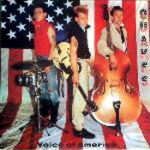 The Quakes – Voice of America

After the release of their debut album, the Quakes were deported back to the U.S.A. due to visa problems. Paul Roman stayed in London and briefly played with Nick Peck in Paul Roman and the Prowlers. In the meantime, Dave Hoy, the band’s drummer died in an accident. Roman returned to Buffalo and, still with Peltier on bass, reformed the band with Brian Doran on drums. This new line-up recorded Voice of America for Nervous. Gone was the hardcore influenced Psychobilly of their debut album. On this one, the Quakes added a good dose of Neo-rockabilly and, like the Rockats, they also included echoes of New-wave too.
The result is a superb and absolute killer album and the perfect balance between energy and melody. It’s also very well produced and recorded (listen to the slap bass on Stick to your Gun.)
Once again, Paul Roman shows he can write lyrics that are different from the usual run of the mill Psychobilly lyrics.
It’s nearly impossible to find a weak track on this platter.

The Quakes – Live in Tokyo

This live album was recorded on February 1992, in Tokyo, Japan (hence the title) where the Quakes, and the Psychobilly and Rockabilly genres, were hugely popular. This popularity would later see the band sign with Sony Japan and release “New Generation.”
After an enthusiastic introduction by Roy Williams of Nervous Records, ‘Live In Tokyo’ kicks off with a breathtaking rollercoaster of Psychobilly and hard-hitting neo-rockabilly. The setlist draws songs from the Quakes’ first two albums with a couple of covers added for good measure. Among those songs, you’ll find the Stray Cats’ Fishnet Stockings, Elmore James’ Shake Your Money Maker and Wigsville Spliffs’ Lonely Boy.
The sound is excellent, and the band with Chris Van Cleeve their new drummer is tight. It benefits the songs taken from their debut album that takes here a brand new dimension.

In 1992, the Quakes signed a deal with Sony Japan. Thus, in October, Roman, Peltier and Van Cleve went to Trackmaster Studio, Buffalo, to record New Generation. Working for a major label was new for the band, but asked if Sony tried to interfere with the music, Roman answered, “No they didn’t?! In fact they didn’t care about the music at all… For them it was about the packaging?! »
After Voice of America, the sound of New Generation surprised the listener. But they shouldn’t have been surprised. After all, the name of the album was New Generation. The album’s core is a solid and well-balanced mix of rockin’ music, pop songs and new wave. Though there’s some variety: It’s Gone is almost pure Rockabilly, Stranded in the Streets is in the vein of their previous effort, while Now I Wanna sounds like a Ramones meet Psychobilly tune.
Paul Roman produced the album under his alias of Vince Orrexx except for two songs (the title track and Gothic Girl) produced by Tim Worman of the Polecats. Gothic Girl is excellent and is not that far from what Worman recorded on his Virtual Rockabilly album the following year. I suspect that the use of a drum machine probably shocked the purists.
Three covers complete the set: Cordell Jackson’s Dateless Night, Bracey Everett’s Lover’s Curse and a slap-bass propelled version of Depeche Mode’s Behind The Wheel. All in all, New Generation is an excellent album, and if the narrow-minded listeners could see beyond the look of the band that doesn’t conform to their vision of Psychobilly, they’d be rewarded ten times!

After 25 years or so of existence, The Quakes still led by the inexhaustible Paul Roman release their 7th studio album and they don’t seem to run out of inspiration. Very few bands can claim that. Roman’s song writing is still sparkling, full of creativity with a superb ability to write complex songs with strong melodies. “Planet Obscure” is in the very same vein as their previous album (the excellent Negative Charge) with some nods to earlier material. Thus “It’s A Curse” sounds a bit like an updated version of “you’re Dead”. Talking about their debut album, there’s a tribute to the band’s first drummer, Dave Hoy, tragically killed in an accident. The lyrics are well crafted too, avoiding the endless clichés of bats, zombies, graveyards and so on, a thing the Quakes never really did.
Most of all, Roman doesn’t seem to care about tags, in that he’s similar to Alan Wilson of the Sharks. Rockabilly, Psychobilly, New Wave, Hillbilly, Brazilian pop… if it’s good to his ears, he incorporates it to create that great Quakes sound that is instantly recognizable. This is all that, and more, that you’ll find on Planet Obscure.