The Ringlets Trio – For Daily Use

After a long hiatus (nearly 10 years) the Ringlets Trio (Gunnar Fick, Lead Vocals & Upright Bass – Ulrich van der Schoor, Backing Vocals & Guitar and Christof Woller, Drums & Percussion) returns with a more traditional sounding album featuring some very good songs ranging from hillbilly bop with steel guitar (Straight Ahead and Top of the World) to Latin influenced tune like Angelina with plenty of rockin’ in between.
After “Brand New Beat” that saw them going a bit too far away from the “Ringlets sound” and “Rockabilly Favorite” that wasn’t really an album, it’s fine to see them return in fine form to something closer, but more modern and with expanded influences, to what the band used to play. To compare what the band accomplished listen to “Why did you leave me” on this album and the earlier version that appeared on “Be Aware”.

The title says it all. Fourteen rockabilly classics played by the Ringlets Trio. If some are pleasant and even good (Lonesome Train, Right Behind You) others, especially the slowest numbers, are just average, especially the vocals that is not always in tune.
Far from being essential.

“Brand new beat”; it’s written on it, so if you think you’ll find on this platter the jivin’-doo-wop-neo-rockabilly that you used to expect from the Ringlets Trio you’re bound to be disapointed. The band changed their style with a fuller sound, a heavy production, pounding drums, and guest instruments (accordion, piano, organ, lap steel…). They remain true to roots music but with a definitive modern approach not far from the Blasters ranging from electrified country to rockin’ blues with zydeco in between. For example their cover of Hank Williams’ Honky Tonk Blues sounds more like Dwight Yoakam than the Lovesick Blues Boy.
Very different from the “old” Ringlets trio but quite good.

This cd of the Ringlets Trio gathers the first and the third albums recorded by this German band respectively in 1988 and 1990.
Big Apple Jive, the first one, is included as a bonus in the second part of the record (tracks 13 to 22). It contains its dose of uptempo neo-rockabilly with slap bass to the fore (Train) and clean electric guitar. They mix it with jive/doo-wop material reminiscent of the Keytones (Cover Girl), a bit of country music (My Only One) and some jazzy-rockabilly (Stranger In Town). Sadly the vocals are not always in tune and it shows its limits especially on songs that need tight vocal arrangements.
Recorded nearly three years later, Rocks is a far better effort on many levels. The guitar sound is richer and Gunnar Fick, still more than able on double bass, feels more confident when he sings. The self penned songs are also more original. The Ringlets Trio added a good dose of blues (Shake Your Money Maker, the house is Rockin) and some songs benefit of the presence of Gotz Alsmann on piano.
All in all a far superior album.

The Ringlets Trio – Be Aware

A far better album than the first one, the band (Hartmut Oderbein, drums – Jens Pinkernell, guitar and Gunna Fick, lead Vocals, double Bass) is tight (though there remains some flaws in the vocals) and deliver some solid neo-rockabilly somewhere between Restless and the Keytones. And there’s still that crazy double bass that is the band’s strongest point.
All in all despite some minor flaws an good album, that reflects what the scene sounded like back in the mid/late eighties. 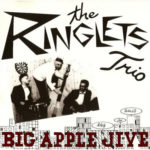 Debut album recorded in September in 1987 and self released by the band. Later reissued as a bonus on their third album (see the review for more details).

The Best of Ripsaw records

Little Tony and the Tennessee Rebels