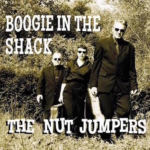 The Nut Jumpers – Boogie In The Shack

Rhythm Bomb RBR5879 [2018]
Woah Oh Ho – Set Me Free – Love Truck – My Pearly Doll – Boogie In The Shack – Pandit – Cʼmon, Cʼmon – Blow Your Top – Catholic Boy – Gonna Stand My Ground – No Good, No Good – Keep A little Place – Nut Jump
The Nut jumpers is a new band formed by well known figures on the rockin’ scene, namely Helen Shadow, Ricky Lee Brawn and Jake Calypso.
Together or separately their names were associated with the Queen B’s, the Blue Ridge Rockets, the Johnson Family, the Big Six, the Stargazers, the Space Cadets, the Shooting Stars, Hot Chickens, Mystery Train and a couple more that I forget right now! Quite a pedigree!
Recorded live, their debut album is everything one could and should expect from a Rock’n’roll album. It’s wild, raw, agressive, threatening, uncompromising and short. No time to lose, it’s a concentrate shot of Rock’n’roll straight to your ears.
Each member penned songs and both Calypso and Shadow sing which brings a lot of styles and variety to the final result.
Calypso’s voice is perfect for that kind of weird stuff and the Rockabilly material. It’s perfectly completed by Shadow’s unique tone that I’m crazy about since I first heard her cover of “I did what I did for Maria” on the Queen B’s album. Talking about signature sound, Ricky’s way of mistreating his snare is also immedately recognizable and provides a solid backbone to all this rockin’ mayhem.

On the more garage side of things, you’ll find “Set me Free”, think about the Kinks meet Billy Childish, and the two instrumentals. “Pandit” has a strong Link Wray/Dick Dale vibe while “Blow Your Top” is the musical equivalent to a locomotive moving full steam ahead with no one to drive or stop it.
Many strange images popped in my mind while listening to this album. The weirdest being generated by Calypso’s My Pearly Doll. I thought “Woah! This is how Buddy Holly would have sounded if he had recorded a tune just after his fatal plane crash.”  Sounds creepy? Listen to the song and we’ll talk about that later. Still in the Rockabilly style you’ll find “Catholic Boys”, with slide and a Diddley beat, and “No Good, No Good” with cowbell and a similar riff to Dale Hawkins’ Suzy Q.
There’s also plenty of blues influenced stuff that either reminds of Elmore James or Jimmy reed but with a dirtier sound and a punkish attitude. In betweeen they find time to include a gospel/chain gang song simply backed by handclaps and foostomps a more countryish number with “Keep A Little Place”.
It’s very pleasant and highly enjoyable to have bands like the Nut Jumpers that are here to have fun and don’t give a damn about styles and genres (and purists) and mix them all to create their music. After all that’s how rock’n’roll was born.